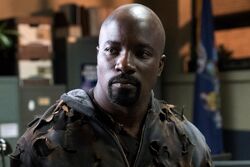 I used to be unbreakable. Now I'm just... broken.

Luke Cage was an indestructible street hero who was recruited by S.H.I.E.L.D. to fight against the forces of Apocalypse. After S.H.I.E.L.D. fell, Luke attempted to rendezvous with the Avengers, but ended up being abducted by the Armada.

Before being imprisoned, Luke was handed over to Mister Sinister who performed extensive experimental procedures on him, eventually depleting the indestructibility from his skin, reducing him back to a mere man. Once his power was gone, he was dumped in the Sphinx, a death camp for former superheroes.

Despite no longer having powers, Luke was more than willing to team up with Black Widow when she tried to start a rebellion. However, the rebellion failed when Archangel ordered mass execution for the death camps. Luke and the others were then led into a Terrigenesis Chamber where they were exposed to the Mists and killed, due to lacking Inhuman DNA.

Retrieved from "https://marvelcomicsfanon.fandom.com/wiki/Luke_Cage_(Earth-9999)?oldid=246077"
Community content is available under CC-BY-SA unless otherwise noted.