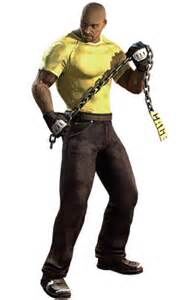 Luke Cage grew up in Harlem, New York, where he was blamed for crimes he didn't commit and arrested. In order to help speed his parole, Luke agreed to some sketchy experiments that gave him unbreakable skin and super strength. Luke decided to go by the alias of Power Man and started Heroes for Hire with fellow super-hero Iron Fist. Since Heroes for Hire returned all the money they made, they disbanded the team, but the two kept in touch as friends. Later he met Jessica Jones, whom he would later marry.

When Doctor Doom and his Masters of Evil attempted to steal Odin's powers to rule the world, Luke Cage joined the Ultimate Alliance, and helped to bring down Doctor Doom's armies and stop his plans.

What is presumed to be one year later, Luke Cage joined his fellow heroes in an unsanctioned attack on Latveria led by Nick Fury. Luke Cage donned a new costume that was black and yellow in color. He was a member of Bravo Squad. Sometime later Tony Stark would try to hire Luke Cage as a security officer at Stark Industries.

In the wake of the Civil War, Luke Cage joined Captain America's resistance movement, and served as Cap's second-in-command, and helped organize multiple attacks on Pro-Registration targets such as the Prison Convoy and Negative Zone prison. When the Fold started to take control of the world, Cage stayed with the Ultimate Alliance to battle the new foe, eventually defeating it.

The Alliance tracked down the Ani-Men to an abandoned area in Hell's Kitchen. Cage & Iron Fist are nearby and are ordered to rendezvous with the squad being sent. But upon arrival, they find said squad engaged in combat with the Shocker & Mister Fear, with duo knocking them out. The six storm the base, defeating along the way Tiger Shark, Armadillo, both Blackouts, Mentallo, the Purple Man, the Controller, the Wizard, and Madame Masque; until finally confronting the man coordinating the group, the Hood. It appeared that the Ani-Men, as well as the Wrecking Crew (who were imprisoned in the Vault before the breakout), have been convinced by the Hood into a supervillain crime syndicate. The Hood is defeated, but it's soon revealed that another member of the gang, the Slug, had already been replaced by a Skrull, having been trained with strong mental blocks to protect his mind from mental detection by the Hood. The Skrull tried to contact help, but was discovered by the Hood and killed. In the confusion, Hood managed to teleport him and the gang out of the base.

Equipment: Cage owns a leather jacket which is, like his skin, impervious to virtually any injury; however, he wears it infrequently and is often left with shredded clothing in the wake of his adventures.
Transportation: Quinjet
Weapons: None known.

Retrieved from "https://marvelcomicsfanon.fandom.com/wiki/Luke_Cage_(Earth-6109.2)?oldid=159045"
Community content is available under CC-BY-SA unless otherwise noted.