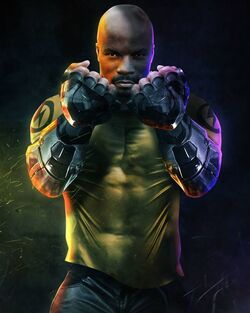 Sweet Christmas... what have I gotten myself into?

Luke Cage is a Potts International Hero who gained invulnerability and super strength after going through Terrigenesis. He and his wife, Jessica Jones, took the mantles of Power Man and Power Woman, and were assigned to the city of Detroit, where they raise their daughter, Danielle.

Due to their popularity among the people, Potts International is very hesitant to send Luke or Jessica on darker missions.

Retrieved from "https://marvelcomicsfanon.fandom.com/wiki/Luke_Cage_(Earth-1515)?oldid=244560"
Community content is available under CC-BY-SA unless otherwise noted.