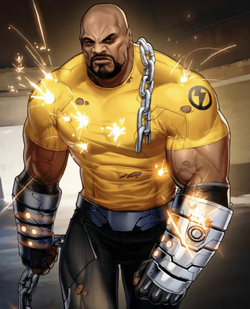 Alright, you win. As an apology, I'll let you punch me in the face. I'll even pay for your hospital bill when you break your wrist.

Raised in a bad neighborhood in Harlem, Carl Lucas dropped out of High School so that he could work in order to support his mother. After her death, he changed his name to Luke Cage and tried to become a police officer. However, he washed out and soon became strapped for cash.

Desperate, Luke agreed for a shady scientific institute to perform experiments on him. This resulted in his skin being laced with Adamantium, making him completely indestructible. Breaking out, Luke realized he could make a living out of his powers.

He was eventually hired by the Private Investigator Jessica Jones to be her body guard. After working together for some time, the two fell in love and accidentally got pregnant, which provided Luke with the perfect opportunity to enact his proposal, which he had been planning for months. Jessica would later give birth to their daughter, Danielle Cage.

The two of them were later hired by the young CEO of Rand International, Danny Rand, to help him investigate the wrongdoings going on behind the scenes of his company. Eventually, they discover the company has been acting as a shadow corporation for the Hand, so Danny reveals himself to be the Iron Fist, and they all work together to fight off the hand.

After success, the three of them go out for drinks, and have the brilliant idea to work together as "Heroes for Hire". They completely revamped Rand International and began advertising themselves for whatever kind of job someone might have for them. Over the years, they would end up recruiting several other street level heroes, including Misty Knight, Black Cat, and the mutants Sunspot and Cannonball. Luke eventually had ownership of the company handed over to him by Danny, who saw how passionate Luke was about helping people, and knew that the Heroes for Hire were safer in his hands, due to his unflinching principles and no-nonsense business attitude.

Retrieved from "https://marvelcomicsfanon.fandom.com/wiki/Luke_Cage_(Earth-101)?oldid=250214"
Community content is available under CC-BY-SA unless otherwise noted.