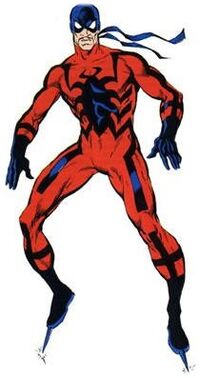 Luis's history is identical to that of Earth-616 counterpart with the exception of his death.

Luis was then recruited to Team Arrow as apart of the Great War. Luis said he ran solo and then was targeted by the heroes' and villain's teams. The United Nations suspected something with Luis and tried to kill him. Team Arrow came to his aid and saved him. Luis would then join Team Arrow.

Equipment: None known.
Transportation: None known.
Weapons: Both of his boots were equipped with retractable blades coated with poison. The poison, once delivered, could cause a victim to become sluggish and a second (or more powerful) dose could paralyze or kill a victim.

Retrieved from "https://marvelcomicsfanon.fandom.com/wiki/Luis_Alvarez_(Earth-1210)?oldid=150304"
Community content is available under CC-BY-SA unless otherwise noted.