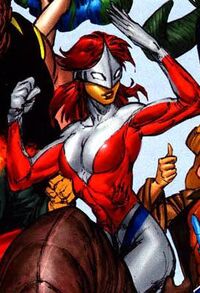 "I see the stars in the sky. I'll go whenever the stars take me"

-- "Being a Superhero takes a lot of hard work"-"Avengers"

Lucy is one of the secret mutants elsewhere along with friendly humans and being treated with care and she becomes a dancer and always dancing in every spotlights. When she's being attacked by muggers she uses her powers to blow them away and she's being found by Jessica Drew. She asks Lucy "Is she alright" and just run off and went back to her room and comforted by her foster mother.

After growing up she continues to be a dancer and being founded by the X Men's leader Professor X to join the team because they know about her powers and she's being a Mutant and an outcast. But at first she does not want to join but they said to her that they are her friends different than the ones who are humans.

After all the hard battles and seeing what war between mutants and humans becoming complicated she leaves the X Men and decided to join the Avengers and Excalibur teams because they fight for saving lives and world peace, being loved by the innocents. She still visits her foster family anytime she likes. Also visits any team she used to join.

Powers not being drained but gathered energy from the opponent. (Like Rouge).

Equipment: None known.
Transportation: Motorcycle (When dressed in her normal Clothes), Jet / Warbird (With other Avengers on a mission)
Weapons: Her body, Sword, Staff

My Bright Star is similar and different to the other Bright Star from Earth-TRN156 because she's on the good side and other is neutral. They had long hair and had a star symbol on their chest and got powers.

Some of her powers and abilities are similar and some are different.

Bright Star from Earth-TRN156 had no real name I decided to give my own character a name. She will be named as different hero name.

It's up to me to give her new Identity Captain UK because of switching identities as a new superheronie. She's another Ms. Marvel and her powers are similar and different to hers as well and she's another English / British like Captain UK Linda McQuillan and Captain Britain Brian Braddock.

Linda McQuillan was the first Captain UK because she's from an Alternate Universe Earth Earth-238.

My character Lucy James as Captain UK is based on Captain UK Linda McQuillan, and other female warriors that similar to Captain UK -Cap'n Saxonia, Captain Cymru, 2 different Justicer Bulls if counting Betsy Braddock before becoming Another Captain Britain she was Psylocke a team member of the X-Men.

Retrieved from "https://marvelcomicsfanon.fandom.com/wiki/Lucy_James_(Earth-616)?oldid=58293"
Community content is available under CC-BY-SA unless otherwise noted.