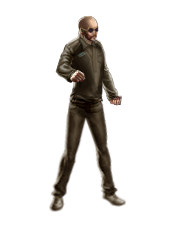 Lucio is a Colombian Inhuman who underwent Terrigenesis sometime after consuming a product contaminated with Terrigen. As a result of his change, anyone who looked directly into Lucio's eyes became temporarily paralyzed. Lucio used his powers to aid the corrupt Colombian national police in abusing their powers and oppressing the people.

Lucio was called in to use his powers when another Inhuman, Elena Rodriguez used her powers to steal guns from the police. Lucio and Colonel Victor Ramon found the Inhuman's cousin dumping the guns into a river, but he was also in the custody of Nekhene and Lance Hunter, undercover S.H.I.E.L.D. agents also looking for Elena Rodriguez. Lucio used his powers to paralyze all three of them, and Colonel Ramon killed Elena's cousin on the spot. They brought the two S.H.I.E.L.D. agents back to their station, but Elena Rodriguez and the rest of their team rescued them. Before S.H.I.E.L.D. could take Lucio back to the United States, a Hydra plane flew overhead and snatched Lucio.

News of the HYDRA Agents' success reached Gideon Malick and Giyera, who discussed recruiting Lucio into their army intended to be used by Hive.

Lucio was trying to stop S.H.I.E.L.D from escaping. He managed to paralyze Lincoln Campbell, but eventually died at the hands of Joey Gutierrez by being stabbed in the chest. Leo Fitz and Jemma Simmons later examined Lucio's corpse and found out that he had been infected by Hive.

Lucio is an Inhuman who achieved his genetic potential after undergoing Terrigenesis and gained superhuman powers.

Retrieved from "https://marvelcomicsfanon.fandom.com/wiki/Lucio_(Earth-1010)?oldid=198499"
Community content is available under CC-BY-SA unless otherwise noted.