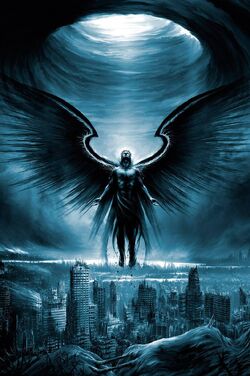 Satan, Fallen One, Prince of Darkness, Prince of Lies, Greeix, Jack O'Lantern, Lucifer Lightbearer, and many others
Identity

It's like what everyone says. If you dance with the devil, you don't change him... He changes you...

Lucifer Morningstar, was the infamous angelic figure commonly found and foretold in Judeo-Christian theology. Lucifer was originally a resident of the pocket realm commonly referred to as Heaven and was one of the greatest Archangels. At one point, he was responsible for leading an army of angels to banish the demonic cosmos entity N'Garai from the benevolent pocket realm of Heaven approximately one million years ago prior to his fall.

At one point, Lucifer had created an angel offspring he created after taking his own elixir using it on the mysterious technological method of the Celestials, something that would eventually be known by humans as alchemy. Thinking it was a mistake, Lucifer decided to eliminate the result he made but God stops him from killing his own "son" and still accepted the offspring, giving him the name of Zarathos.

Lucifer then raised his son as a powerful and skilled warrior just like him, and eventually Zarathos rebelled against Yahweh that led to his downfall when he was tricked by one of the earliest Hell-Lords, Mephisto (who still isn't a fully-formed Hell-Lord back then). Lucifer became proud of his son for rebelling against the Creator, but became very disappointed when he let himself get fooled by the manipulative tricks of Mephisto.

At some point afterwards, Lucifer finally decided to lead a rebellion of up to one-third of the angelic host whom he deceived in an attempt to take over heaven from Yahweh, God of the entire creation. His revolt failed in the process of almost winning against most of God's defenders of Heaven, only to be defeated by his brother, Jesus Christ himself, by the moment he was close into killing one of the most loyal archangels of God, Michael. In his defeat, Lucifer would later accuse God of loving his human creations throughout the universe, especially on planet Earth, more than the angels that lie in Heaven, even before reality itself was unintentionally conceived into existence during the Great Multiversal Rebellion of the Beyonders against the godly Celestials, a later conflict (something that was coincidentally inspired by Lucifer's rebellions actions) that would end in the subsequent creation of the central reality of the multiverse known as the Modern Universe.

As an extreme punishment for his attempted takeover he and his lieutenants Beelzeboul, Kazann, Malachi, Olivier, Pazuzu, Xaphan and others were all casted down into the pocket nether dimension at the edge of the multiversal void called "Hell" wherein they eventually became degenerate-looking beings called "demons" as a result of cosmic mutation. In Hell, Lucifer looked nothing like the high form of angel he once was. He and all of his loyal lieutenants had degenerated into demons, some through instruction, others adapted more naturally. But they had all over time, changed into twisted creatures of evil. Lucifer eventually rose to claim dominion over hell in the shadows, announcing his new name as the "Devil", or Satan, as it was translated in some other languages. Though some speculate to whether the Devil is actually real since he has not been seen for millennia. It was only in recent times Lucifer himself has emerged.

His servants in the mortal world of planet Earth has regained for thousands of years, willingly offering their souls to the Devil, causing for Lucifer to emerge on Earth several times, though temporarily after his battles with a mortal and reincarnated Jesus Christ, the begotten son of God and his peaceful brother, whom he kept on deceiving but still had failed in the end during Jesus' crucifixion, causing for him to be banished by God once again back in Hell for a hundred years more.

Before he even resurfaced on Earth during modern day, Lucifer had several encounters in other realms of Hells with other powerful demons including Mephisto, the Asgardian godess of death Hela, the Faltinian entity Dormammu and a few more, each in control of their respective 'Hell' dimensions and are known to use the infamous title of "Satan" as an act to manipulate mortals over and over again. From time to time groups of them meet to discuss issues concerning all of them. Many of the other Hell-Lords have taken on the appearance or even claimed to be the true Devil to play off his reputation.

But nevertheless Lucifer is still credited as the one who originally created his son Zarathos, the demonic entity who acts as the source of the Ghost Riders' powers. As a Hell-Lord, he eventually became the most powerful one in the demonic society, and overtime Mephisto started disliking him due to his own way of leading to the alliance, becoming selfish to his own fellow leaders.

At one time during modern day, his resurfacing servants in the mortal world manipulated Johnny Blaze into damning his own soul to hell so Lucifer could torment him. The only thing that can be taken for granted is that Lucifer recently came into possession of the soul of Johnny Blaze. Lucifer tricked Johnny Blaze into escaping Hell along with Lucifer. The stress of the journey broke Lucifer into 666 pieces which inhabited the recently deceased.

This version worked to arrange their own deaths while causing as much mayhem as possible. Each time one died its power would be absorbed by the rest until Lucifer fully reformed on Earth. Ghost Rider hunted down and slew most of these versions himself. In the end, they had a final showdown when Zarathos went berserk against his father, controlling over Johnny's body turning the flames of the Ghost Rider into red before attacking each other. Lucifer seemed to be getting defeated at first but still manages to gain the upper hand on Ghost Rider, choking him.

Before manages to kill his own son and absorb his soul and powers onto his own, the skies of heaven shines through Lucifer and there, an army of angels and archangels charges towards Lucifer before all of them along with Lucifer vanishes in a blink of an eye, leaving only Ghost Rider on the scene before reverting back to normal form, back to Johnny's form who was seemingly confused about what happened to Lucifer.

A "Deal" with Mephisto

The angels battled him and Lucifer killed half of the angels until he eventually was defeated after he was miraculously vanished into another realm of Hell, ruled by one of the Hell-Lords, Mephisto. He manages to make a deal with Mephisto by giving Lucifer his own realm of Hell to Mephisto to rule it on his own in the exchange of getting him the largest army which is a number of countless centillion legions perhaps, of demons and rebel angels, enough so he can finally to lead a another rebellion against God and whoever stands on his way in an attempt to take over Heaven, one last time.

Eventually, Mephisto grants Lucifer's deal by making him the largest army of fallen angels and demons he could've ever offer to him, armies he gathered from the abandoned realms of Gog and Magog. An army composing of countless centillion legions, a thousand times more than most of Heaven's different angelic hosts combined, outnumbering them. Lucifer led his entire army, and charges against the gates of Heaven, who was guarded by the entire angelic host. The angelic host seemed to be defeated and each angel of God begins to perish immediately due to their seer strength in numbers. This day was known before by Judeo-Christian theology and everyone else as the "Battle of Armageddon," due to the battle being taken at the ancient city of Armageddon, a city which was located closest to the gates of Heaven.

They were close to reaching the gates until another beam of light shoots through the battleground, signaling the upcoming arrival of the Spirits of Vengeance, a team of benevolent beings who protected mankind during ancient times that is composed of all Ghost Riders from each different timelines in history. They were sent to help the warriors of God defend the gates of Heaven, charging towards the remaining legions of Lucifer.

They battle for an unknown amount of time, until all of Lucifer's armies were eliminated, leaving only a few of Lucifer and his few surviving lieutenants. The lieutenants were extinguished and due to Zarathos' hatred for his father, Johnny Blaze let him control as the Ghost Rider one more time, and they battled each other once again, but was still outmatched in the end by his father and creator.

Lucifer unleashed his innermost true power of a Hell-Lord, and rapidly attacks Zarathos annihilating him in battle. While the angels and the Spirits of Vengeance charges towards Lucifer to help Zarathos in defeating the Devil, but due to Lucifer's most powerful state, they were all defeated and some were disintegrated, killing them in the process.

The remaining angels who were severely injured by the Devil had no choice but to watch as Lucifer is a about to strike his final killing blow to his son, until the last beam of light shoots through the battleground, aiming straightly towards the Devil. The individual who attacked Lucifer was revealed to be Jesus Christ Himself, and singled-handedly outmatches Lucifer with His true powers, before finally vanquishing him from the battleground of Armageddon, transporting him in his own realm of Hell.

Lucifer told Jesus that it would be a very big mistake if He transported the Devil in his former realm, since it was now ruled by Mephisto after their deal. Jesus sarcastically questions him "What deal?" before smashing him into the grounds of Lucifer's hell, leaving him to pass out for a short while. Once Lucifer woke up, Jesus vanished, and due to his defeat Lucifer started taunting and cursing the Holy Trinity until realizing that he was actually betrayed by his fellow Hell-Lord, Mephisto who never followed their deal properly.

After taunting the Holy Trinity, he tried to unleashed his most powerful demonic powers in the realm, until everything in Hell starts to collapse. Lucifer was so distressed and tries to seek every way out to escape the collapsing state of Hell. He seemingly finds a way out but it was revealed to be an illusion made by Mephisto, thinking that there is a way out of this trap. Once Lucifer touches the illusion, he became depowered, losing all of his angelic or demonic powers and abilities.

Lucifer realizes that he is entirely doomed, screaming with anger and distress before falling into the depths of the realm once known as Hell, was now-turned as a version of the Lake of Fire, along with his other fellow legions who slowly burned to death throughout eternity, and Lucifer had no choice but to suffer for a very long time before he supposedly dies in despair, slowly melting in the place he once ruled now became his own eternal torture chamber and his final demise.

Demonic/Angelic Physiology: Lucifer is a fallen angel and a demon, which possesses vast supernatural power, which is apparently inherent within him.

Despite his vast power Lucifer is trapped in hell and cannot leave it under his own power. He had to trick Johnny Blaze into freeing him. Lucifer's metaphysical essence was said to be too great for Earth resulting in his fragmenting. His fragments could not commit suicide due to that being a sin would have condemned that fragment to Hell, making it impossible for him to ever truly reform.

Retrieved from "https://marvelcomicsfanon.fandom.com/wiki/Lucifer_Morningstar_(Earth-61615)?oldid=230823"
Community content is available under CC-BY-SA unless otherwise noted.