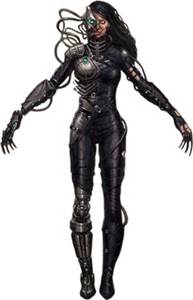 formerly ally of the Tinkerer
Universe

Little is known about von Bardas' life before the Secret War. It can be assumed to be similar to her mainstream counterpart.

Lucia von Bardas is the Prime Minister of Latveria, due to the apparent "death" of Doctor Doom. Von Bardas was secretly funding American technology-based super-criminals through the Tinkerer. S.H.I.E.L.D. found out about this, but the President didn't take measures that Nick Fury, Director of S.H.I.E.L.D. had suggested, believing that they could handle the situation diplomatically. In turn, Fury gathered a group of heroes for an undercover mission to overthrow the Latverian government and assassinate von Bardas. Bardas apparently died when her castle exploded.

Exactly 1 year later, von Bardas attacked New York as a deformed cyborg. She had Grey Gargoyle set up bombs in NYC to keep the Ultimate Alliance distracted. However, four heroes (guided by Ms. Marvel) found her on a ship, she soon after activated herself as a bomb, taking Diamondback, Scorcher, Shocker, and Wizard along for the ride. However, she was defeated and deactivated by the heroes, lamenting her failure to Latveria.

Retrieved from "https://marvelcomicsfanon.fandom.com/wiki/Lucia_von_Bardas_(Earth-6109.2)?oldid=231003"
Community content is available under CC-BY-SA unless otherwise noted.