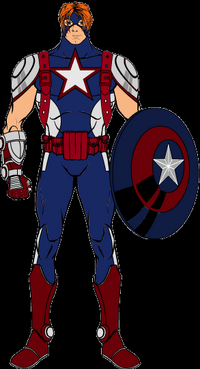 Son of the Captain, Widow Kid, The Next Captain
Identity

Lucas is the son of Steve Rdogers and Natasha Romanov, a result of a short lived romance between the two. The two were working with SHIELD at the time that they were together, but when the famous Black Widow discovered her pregnancy she took a leave of absence from spy work until the time Lucas was born. But at some point before his birth, Natasha and Steve called off their relationship when Steve rekindled a relationship with Agent 13. Yet, despite this set back Steve was there when Lucas came into the world but agreed with Natasha to allow him to be taken with her.

Little over two years following, Lucas was watched over and raised by his mother until she felt it was time to return to SHIELD. Following this decision, Lucas was raised at SHIELD while also living a semi-normal life. His time from two years and up was split between staying on the Helicarrier to be trained as a spy and soldier and being a normal person, such as going to school among kids his own age. Yet, by the time he was about nine Lucas began to display signs of having enhanced features like his parents before him which was taken notice of by teachers at first.

Lucas was showing signs of greater strength, speed, and stamina than most children and got in trouble a few times for not only finishing his work but getting bored and falling asleep. Natasha's attention was brought to this when contacted by his school's principle sometime after he turned ten, forcing her to have to up his training and discipline. Between that and to his high school years Lucas had nearly double the work of any other children and found his regimen becoming a grueling one back home on the Helicarrier. He even began training alongside other young agents, at the time being tutored by his own father alongside his half-sister Kaitlyn and his best friend, Samuel Wilson Junior. But it was at fifteen that things began to change when Lucas realized him and Kaitlyn had a connection: Captain America as their father.

When the two discovered this, Kaitlyn's and Lucas's friendship soured to the point of accusations between them turned into occasional fist fights. This triggered Sam having to cut into stop them and Steve unfortunately having to end tutoring the three and put them in SHIELD's hands. After that Lucas was separated from his sister and worked with Sam instead.

Taking up the Mantle

When the time came that Lucas turned sixteen, things began to look up for the young soldier spy. Lucas quickly became popular in high school for his athletics and good looks, something he inherited from his father and mother, while also dating one of the smarter, prettier girls in the school. Unfortunately, that began to change quickly the moment Lucas was one day being transferred out of the school by Natasha much to his displeasure.

Six months later, Lucas would turn seventeen with his schooling being done at SHIELD up until he discovered why he was taken from his school. He was instead brought to the newly opened Avengers Academy where he was united with with old faces and new, being put on the Alpha squad.

Lucas was born human but received many of the enhancements his father and mother had from their respective exposures to two different versions of the Super Soldier Serum. But it was stated by some doctors that the combination of the two have made him practically superhuman, making his enhancements greater then that of Steve Rodgers.

His strength is about two to three times that of a man is age and height.

Retrieved from "https://marvelcomicsfanon.fandom.com/wiki/Lucas_Rodgers_(Earth-7194)?oldid=161717"
Community content is available under CC-BY-SA unless otherwise noted.