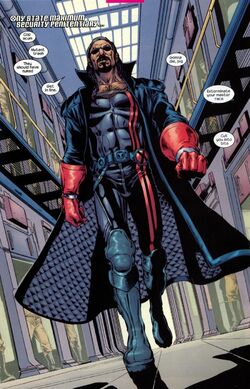 Bishop's history is exactly the same as that of Earth-616's Bishop up until the Marvel NEW! relaunch.

When Captain America began forming a new Avengers team for mutant-equality, he used Iron Man's technology to retrieve Bishop from the future. He invited him to become a member of this team. He accepted, because upon re-entering the future, he found it was even worse than when he left it.

Energy Reflection: Bishop's powers are identical to those of his 1191 counterpart. He has some added abilities with absorbed energy:

Bishop is able to consciously determine his location no matter where he is. During the Phoenix Saga, he was able to do this even in space. He is a master of armed and unarmed combat, firearms, and interrogation.

Equipment: None known.
Transportation: None known.
Weapons: Bishop always wields energy rifles that work on conjunction with his energy powers.

Retrieved from "https://marvelcomicsfanon.fandom.com/wiki/Lucas_Bishop_(Marvel_NEW!)?oldid=236463"
Community content is available under CC-BY-SA unless otherwise noted.