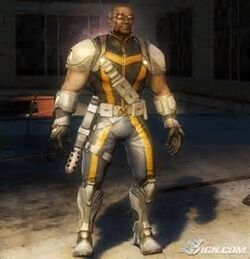 Single
Occupation
Adventurer, detective
Origin
Origin
Mutant came to the past and was able to help the legendary team his grandmother told him about.
Place of Birth
A mutant relocation camp in New York City in an alternate 21st Century Earth
Creators

Little is known about Bishop's life before the Civil War. It can be assumed to be similar to his mainstream counterpart.

Before the passing of the Superhuman Registration Act, Bishop contacted fellow future X-Man Cable and failed to change his mind about registering - using the alternate futures they came from as an argument. Bishop was of course among the heroes to support the SRA with S.H.I.E.L.D. During the Ultimate Alliance's final fight against the Fold: Black Panther voiced over the radio from Wakanda that the collective have assimilated Bishop.

Bishop recently has shown the ability to instinctively determine his exact location and the time he is in at all times, even if asleep. This may have to do with the chronal energies he absorbed. Bishop is a trained police officer, skilled in the homicide branch. Bishop has also had many years of armed and unarmed combat training has made him a devastating unarmed combatant, and a superb marksman with firearms, both from his own time, some of which he brought with him from the future when he originally arrived in our present, and also both heavy duty military and conventional guns and weapons of the present time.

Equipment: Sunglasses that display information and allow communication with the rest of the X-Men.
Transportation: None known.
Weapons: Guns that fire laser beams and plasma charges. He is able to recharge them with his own stored energy.

Retrieved from "https://marvelcomicsfanon.fandom.com/wiki/Lucas_Bishop_(Earth-6109.2)?oldid=256370"
Community content is available under CC-BY-SA unless otherwise noted.