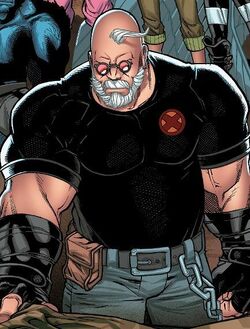 Keep calling me "Strong Guy," and I'm gonna lose it...

Born around the early 1950s to a divorced, single mother who died giving birth to him, Louis "Lou" Carosella was unfortunately an orphan who was taken in and raised by his cousin's classist and conservative family. Growing up to be a rebellious adolescent, Lou would later run away from home and instead volunteer into joining the Army during the escalation of the Vietnam War when he reached the age of 18. Since he was mostly home-schooled and frequently isolated within the confinements of his aunt and uncle's house due to reasons they didn't reveal for his own sake, Lou only got the chance to expose himself into the greater world through military training. For the very first time in his life, Lou has never felt freer and liberated when he was serving in the army, meeting new friends in the form of his comrades-in-arms, though he would also realize that reality isn't as easy as it seems. Time after time, Lou would explore his identity and emerging sexuality in a toxic, homophobic environment.

Despite his many attempts to hide it, his feelings would eventually be noticed by one of sergeants named Bill, who was also questioning how he feels and tried "straightening" himself by serving in the military. His attempt of self-repression obviously came to an end, as Bill and Lou came to open up to each other before committing to develop a romantic and intimate relationship, albeit in secret as the times weren't so welcoming to their feelings just yet. While the two's relationship would remain nurtured and protected as a secret throughout their training days, the ride of their romance started to get bumpy when their unit was finally deployed somewhere in the forests of Vietnam. Lou and Bill fought side by side as comrades and secret lovers, firing at the forces of the Viet Cong, until the worst day abruptly came to take away the flames of their relationship. During an ambush initiated by an enemy troop, Bill was shot several times by enemy soldiers, dropping on the forest floor as he bleeds to death.

Ridden with burdening emotions and experiencing a nervous breakdown after witnessing his lover get extremely hurt, Lou's veins started to flow with adrenaline, feeling uncontrollable rage and thus his mutation was finally triggered. On that moment, every painful shot of bullet that the enemies have fired at Lou was converted into his power, and harnessing it, Lou proceeds to angrily beat and smash his lovers' killer into a bloody pulp until the surviving enemies were forced to retreat. Sitting in the forest, Lou sobbed as he held Bill's lifeless body, cradling him in his arms as he and other surviving comrades of his unit awaits their way back home in the form of a chopper. His allies were fearful seeing his mutant powers come out, but Lou couldn't care less on what his superiors would do to him, as he was already hopeless losing the man that he loved.

On the verge of being discharged from the army due to his generals discovering his mutant powers, Lou was eventually recruited by the secretive Major William Stryker to join the black ops group Squadron X, consisting of Jim Howlett, Victor Creed, John Wraith, Fred Dukes, David North, Chris Bradley and Lou himself, since the army no longer wishes to bring him back into their ranks. Due to his strength-granting powers, Lou was often nicknamed by his teammates as the "Strong Guy," something which frequently vexes and to an extent, angers him. After a mission in Africa that made Logan left and quit the squadron, Lou and his other comrades (reluctantly) remained obliged with Stryker's leadership and began hunting both dangerous human criminals, along with his own kind. Despite knowing, Lou couldn't easily decide to back out, just like Logan has, out of his disgust for Stryker's worsening orders due to his secret relationship with his fellow comrade John Wraith, who was also feeling just as guilty for hunting other mutants for the sake of Stryker's experimentation. When Squadron X was finally disbanded, Lou and John broke up and was separated as most of team went their own separate ways, seeking to hide and hopefully move on from their painful past history getting involved with Stryker's black ops team.

Lou was hanging out inside a bar, in which he was recruited by Charles Xavier and Erik Lensherr to join their team of mutant peacekeepers that they were initially forming for the C.I.A., which consisted of other mutants including Hank McCoy, Maeve Rourke, Warren Worthington II, and Raven Darkholme. Believing in Xavier and Lensherr's cause, Lou joined the Division X since he wanted to redeem the very mistakes he and his former teammates failed in correcting during his times in Squadron X, and now use the opportunity to protect his fellow mutant brothers and sisters. After the Hellfire Club tried to recruit them, Sean and the others relocated to Xavier's mansion where they began training to defeat Shaw. Xavier resolved to stop the Hellfire Club and began to train his young group in preparation for conflicts to come. While training, Lou prolifically made his new heroic mutant cryptonym as Mastodon.

During Division X's skirmish against with the Hellfire Club which took place in the now historical Cuban Missile Crisis, Erik and Charles' views regarding the path of the emerging mutant race diverged into two main paths, resulting in the end of their friendship and the fracturing of their team. Remembering how he and his people were abusively treated and hatefully perceived every now and then, Lou was disillusioned with Xavier's impractical pacifism and found himself agreeing with Erik's ideology, joining his side along with Raven in founding the Brotherhood of Mutants. Ever since joining Erik's Brotherhood, traces of Lou later on have disappeared from the X-Men, with most of its members initially believing that he died from old age or other more unfortunate circumstances.

However, it was later revealed that Lou was peacefully living as a hunter and farmer in the Brotherhood's island of Genosha. Lou would also reveal that he contracted HIV years earlier, but for some reason his regenerative powers had kept it from straining his immune system, restricted any chances of it developing into a full-blown AIDS, and even prevented him from experiencing any of its symptoms. The only downside of this was the fact that while Lou was technically immune from experiencing any symptoms, he is still an asymptomatic carrier of it and could still infect others through physically-intimate contact, unless they have natural immunity to toxins and diseases. Fortunate for Lou, however, the mutant people of Genosha were accepting to his condition, which eventually made Lou one of the most beloved citizens of the Genoshan nation who have lived in it since the day it was founded, practically making him a native celebrity around there.

Homo Superior Physiology: Mastodon has the ability to absorb kinetic energy and use it to enhance his physical strength to above normal limits. Gaining powers through kinetic absorption, Lou has experiences regular to extreme cases of muscle growth, providing him with superhuman strength, durability, and endurance. He continues to experience regular muscle growth. His skin is also durable enough to resist firearms.

Retrieved from "https://marvelcomicsfanon.fandom.com/wiki/Louis_Carosella_(Earth-61615)?oldid=265679"
Community content is available under CC-BY-SA unless otherwise noted.