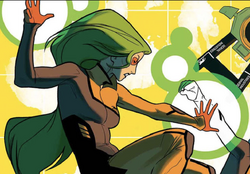 Earth-91939
Base Of Operations
The Outside
Characteristics
Gender

My father and I never particularly saw eye to eye. He thought he deserved to rule the world, I thought it was my responsibility to save it. Even after his death, I feel like I've never really escaped from his shadow. It really didn't help that both of my siblings kept fighting for his cause against me... so it's nice to finally be dealing with someone else's problems for a change.

Lorna Lehnsherr is the third child of the mutant extremist Magneto. When her powers first developed, she was terrified of what it meant. She did not want to join Magneto's Brotherhood of Mutants, and was first discovered by Charles Xavier who was recruiting mutants to fight on the government-funded team X-Force. She joined fellow mutants Cyclops, Storm, Iceman, Dazzler, Colossus, and Nightcrawler to become the world's premiere superhero team. Lorna would go on to form a very close and intimate relationship with Nightcrawler.

She is recruited into the Outsiders under the threat that if she returned to her reality, an altercation between X-Force and the Brotherhood would go wrong and result in the deaths of several civilians, as well as Nightcrawler and Dazzler. Not willing to take that risk and put her teammates in harm's way, Polaris accepts her role on the Outsiders and quickly becomes good friends with her teammates, particularly Sabre and Firestar, as well as coming to look at Colossus as the older brother that her version of Quicksilver never was. She enjoyed seeing all the possibilities of the multiverse and was fascinated knowing alternate versions of her own teammates, such as Colossus and getting to know Scott Summers' son Cable.

[[Category: In a relationship with Kurt Wagner Characters]]
Retrieved from "https://marvelcomicsfanon.fandom.com/wiki/Lorna_Lehnsherr_(Earth-91939)?oldid=246132"
Community content is available under CC-BY-SA unless otherwise noted.