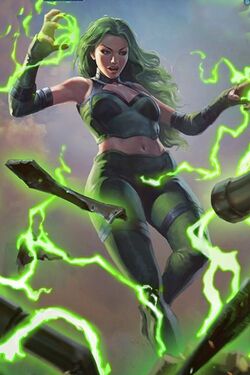 I have no issue with humans. I do, however, have an issue with the rampant extermination of my species, and I will not stand for it.

During Magneto's travels across America, he met a woman named Sally Dane with whom he had an affair. This resulted in the birth of his daughter, Lorna, who he did not know he had. She grew up in northern California, where she discovered she was able to manipulate metal with her mind.

She initially tried to show off to impress people with her abilities, but only succeeded in ratting herself out to the local authorities, who were very mutantphobic. She was able to use her powers to defend herself and go on the run, but not without making the news first.

From there, Magneto tracked her down and identified her as Sally's daughter, this time sure she was his child like he never was with Quicksilver and Scarlet Witch. He instantly took her under his wing and brought her to Genosha, where she was treated like royalty.

Retrieved from "https://marvelcomicsfanon.fandom.com/wiki/Lorna_Lehnsherr_(Earth-101)?oldid=247896"
Community content is available under CC-BY-SA unless otherwise noted.