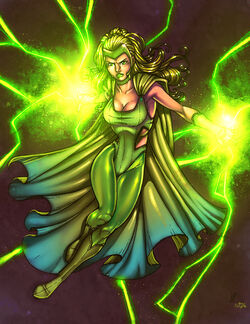 Divorced
Origin
Origin
Polaris rejoined the X-Men to fight her father and recover her lost past.
Creators

Polaris' history is exactly the same as that of Earth-616's Lorna Dane up until the Marvel NEW! relaunch.

Polaris was recruited into the X-Men because the X-Men formerly had Magneto and needed that kind of heavy hitter. She was happy to join, because she wanted to track down her father. She dedicated herself to the eradication of Cyclops' X-Men, and began to show some personality traits matching those of her father, including his brash stubbornness.

Retrieved from "https://marvelcomicsfanon.fandom.com/wiki/Lorna_Dane_(Marvel_NEW!)?oldid=84232"
Community content is available under CC-BY-SA unless otherwise noted.