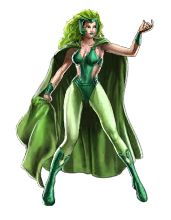 Lorna Dane is a mutant, born of an affair between her mother Suzanna and Magneto. Her mother's husband, Arnold, later learned of this affair and confronted his wife while he was flying her and Lorna on his plane. An argument erupted, upsetting the infant Lorna whose desperation to make her parents stop fighting caused an early manifestation of her immense magnetic abilities, which caused a magnetic pulse that destroyed the plane and killed her parents, as well as giving her hair its iconic green color. Lorna survived the crash and was found by her true father, Magneto, who had been drawn to the location by her magnetic pulse. He took her under his wing and she went to live with him to Genosha. Magneto was very overprotective of his daughter, afraid she would leave him like Pietro and Wanda.

Magnetic Field Manipulation: ability to manipulate magnetism. Although she has the potential to exercise all of the powers that Magneto has, as yet she has only used powers involving the manipulation of magnetic, electrical, and gravitational fields. Moreover, she has yet to summon as great an amount of energy as Magneto has. The exact limits on the amount of weight that she can magnetically lift at present have not been measured. Since she has, in the past, preferred not to use her powers in combat situations, and has decades less experience with them, she is not up to par with Magneto's level of experience. As with Magneto, it is unknown whether Polaris's powers are purely psionic or whether they derive from her physically.

The main feat made possible by magnetism is Polaris' ability to lift and manipulate metal. She has shown such fine tuned skills as to nearly liquefy, mend, and reconstruct metallic objects, and has some level of influence on the ferrous metals that reside in everything. She once mended and reconstructed silverware and metallic plates into a metallic suit identical to Magneto's costume.

Her personal polarity is opposite that of Magneto's.

Lorna possesses expertise in geophysics, and has earned a Masters degree in that field.

Polaris possesses the normal human strength of a woman of her age, height, and build who engages in moderate regular exercise. When possessed by Malice, Lorna had superhuman strength with an unknown upper limit.

Equipment: None known.
Transportation: Capable of flying under her own power, which she tends to do most of the time.
Weapons: None known.

Retrieved from "https://marvelcomicsfanon.fandom.com/wiki/Lorna_Dane_(Earth-1010)?oldid=114796"
Community content is available under CC-BY-SA unless otherwise noted.