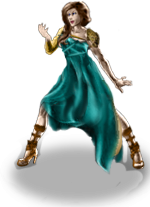 Lorelei is the younger sister of the sorceress, Amora the Enchantress. The two sisters share an interest in using their beauty and wiles to dominate any male that either desires. However, unlike Amora, Lorelei has had no interest in mastering sorcery, apart from learning certain skills to aid her in her amatory pursuits. Both sisters are natives of Asgard.

Loki, the Asgardian god of evil, chose Lorelei to seduce his longtime enemy, his stepbrother Thor, god of thunder. Lorelei, who was strongly physically attracted to Thor, needed no persuasion to agree to Loki's scheme. Lorelei prepared a love potion which, if Thor drank it, would cause him to fall madly in love with the first woman he saw. Loki hoped that Thor's passion for Lorelei would distract him from interfering in Loki's schemes for gaining power. Thor had not seen Lorelei since she was a child, and so would not recognize the adult Lorelei. She went to New York City on Earth, where she claimed to be a mortal human being named Melodi. There she confronted Thor's old enemy, the dragon Fafnir, who used his hypnotic abilities to overpower her. Fafnir took her captive and used her as bait to lure Thor into a trap, at the construction site where he worked in his secret identity of Sigurd Jarlson. As Jarlson Thor saved Lorelei from death, and then fought the dragon in his godly identity. Hence Thor and Lorelei first met in their false identities as the humans Jarlson and Melodi. Jarlson and Melodi became friends, and Melodi was clearly attempting to deepen the relationship into a romance. Circumstances, however, prevented her from getting Jarlson to drink the golden mead she had prepared using the love potion. Lorelei was then kidnapped by Thor's foe Malekith the Accursed, leader of the Dark Elves. Malekith used sorcery to cause a stock of wood to take on the appearance of Melodi, and this magically animated false Melodi gave Jarlson the mead to drink. Under the mead's spell, Thor fell uncontrollably in love with Melodi (since the first "woman" he saw bore her appearance). Malekith then revealed to Thor that the real Melodi was his prisoner. Thor, enraged, rescued Melodi from the Dark Elves. Soon afterward the demonic Surtur began his war against Asgard. Amora was infuriated by Lorelei's refusal to join in fighting Surtur's demonic hordes, and decided to take vengeance on her. Odin, monarch of Asgard, vanished along with Surtur at the war's end.

Loki then planned to use Lorelei to influence Thor to throw his support behind Loki's bid to become Asgard's new ruler. Loki gave Lorelei the elixir of Lofn, which, when Thor inhaled its vapors, would make Thor fall so deeply in love with her that he would do whatever she asked. In effect, Thor would become Lorelei's slave. Loki instructed Lorelei to then persuade Thor to support Loki's bid for the throne. Lorelei was tiring of Thor, but agreed to Loki's scheme since she planned to have Thor become monarch himself, and to make her his queen. She subjected Thor to the vapors of the Elixir of Lofn, and he fell under her control. To take revenge on Lorelei, the Enchantress cast a spell on Odin's scepter of power, knowing that Loki would pick it up, as indeed he did. Due to the spell, when Lorelei next saw Loki, she fell madly in love with him.

Lorelei possesses the conventional attributes of an Asgardian woman. Like all Asgardians, she is extremely long-lived, aging at an extremely slow rate upon reaching adulthood, superhumanly strong, immune to all Earth diseases, and resistant to conventional injury. Asgardian flesh and bone is about three times denser than similar human tissue, contributing to the gods' superhuman strength and weight. Lorelei's Asgardian metabolism gives her superhuman endurance at all physical activities. Lorelei may have the potential for having mystical powers like her sister, but she has chosen not develop it to the same extent.

Will Domination: Lorelei has a hypnotic power to enslave the wills of men. She does so primarily with with verbal suggestion, but strong-willed men can resist the effect until she can reinforce her voice with a physical touch. Enthralled men retain all of their knowledge and skills, but their goals change to reflect their utter devotion to Lorelei. Women are reported to be completely unaffected by Lorelei's spell.

Superhuman Strength: Lorelei has a level of strength consistent with a woman her age height and build who engages in moderate regular exercise.

Superhuman Durability: Lorelei's bones, and skin and muscle tissues, are tougher than those of a human being, contributing to a proportionately greater mass and high physical durability.

Superhuman Longevity: Lorelei has a lifespan far longer than that of a human being. While not truly immortal, she is known to have attained a villainous reputation six centuries prior to her brush with S.H.I.E.L.D. and will have lived for hundreds of years before that.

Lorelei's great beauty and seductive manner enable her to persuade virtually any male god or mortal to do whatever she wants. Lorelei has some knowledge of sorcery, mostly pertaining to love charms and potions. Lorelei also possesses a petrifying kiss, transforming victims into a granite statue. In battle, she was depicted as firing mystical force bolts, similar to her sister's.
Lorelei is a skilled swordswoman, not good enough to beat Sif, but good enough to hold her off for while.

Asgardian flesh and bone is about three times denser than similar human tissue, contributing to the gods' superhuman strength and weight.

Lorelei's lust for wealth and power, and the need to maintain a group of men whose actions tend towards the irrational, makes her very indiscreet. She can seldom remain hidden for long before her nature gets the better of her and she (or her thralls) betrays her own presence.

Retrieved from "https://marvelcomicsfanon.fandom.com/wiki/Lorelei_(Earth-1010)?oldid=132881"
Community content is available under CC-BY-SA unless otherwise noted.