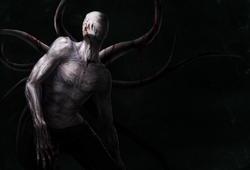 Very little is known about the origin of Lord Phantom, because only his existence already is an absolute mystery to even omniscient beings like the Living Tribunal himself. Supposedly the last "survivor" of an ancient race that existed in the old universe, all that is known about he comes down to his name, Manner Sled, and the very little that he revealed about himself. Apparently, even Sled himself doesn't know how he came to exist, nor its purpose.

Since the dawn of the universe, ancient legends were passed among civilizations. Among many languages​​, the legendary Ghost King became a being as feared as the Death himself. One who terrorized even Living Tribunal himself with his presence, the ghost of the universe, the spectrum of Creation. His fame reached legendary character, and with the many names that he has received among the millions of languages ​​in the universe, one prevailed over the others: the Lord Phantom. Revered and feared by many civilizations in all the Multiverse, it has become common belief that bizarre incidents were caused by him. A person lost in the middle of the forest, a shadow passing through the window, a shadow behind the door, a monster under the bed. And among many who were before him, even beings like the Hulk, Thanos and Galactus trembled at the awful presence of Sled, clear proof of his immense power.

Transcendent Ghost Physiology: Sled's unique physiology allows him to be an immensely powerful spiritual being, able to manipulate all the forms of dark energy and spiritual powers. This includes the conventional ghost powers, such like intangibility and invisibility, but also gives him immense amounts of power, even physical abilities.

Retrieved from "https://marvelcomicsfanon.fandom.com/wiki/Lord_Phantom_(Earth-616)?oldid=268437"
Community content is available under CC-BY-SA unless otherwise noted.