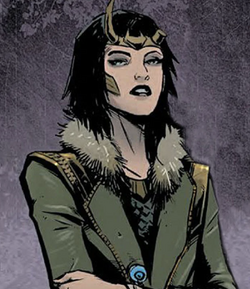 For as long as after she was born, Loki was a thorn in her father's side. She enjoyed making mischief, and often angered her older brother, Thor, with her antics.

However, Loki always loved her family and had no intention of ever truly betraying them. She was approached by Malekith with an offer to join the Order of the World Tree, but she denied and attempted to warn Odin, only for Malekith to stab her in the heart.

Due to her Asgardian physiology, however, she was able to survive this attack. But she only recovered after Asgard had already fallen, and Thor had become a slave to the Enchantress. Seeing no other course of action, Loki abandoned her home as it burned and ventured to the secret Tenth Realm that the order did not know about; Heven.

For as long as Surtur's wars raged on Earth and the immediate surrounding cosmos, Loki hid in paradise, too afraid to face the reality outside her window. Eventually, she was urged by one of her close angel friends, Sera, to venture back out and attempt to avenge her family.

Loki and Sera teamed up and set off to tear through Surtur's forces across the galaxy. They eventually came into contact with the Guardians of the Galaxy, whose leadership had been taken over by Thanos. Loki refused to fall in line to Thanos's orders, and staged a mutiny. However, she was stopped by Star-Lord, who attempted to kill her out of his belief that Thanos was the universe's only hope. Loki and Sera proceeded to enlist Rocket Raccoon to their cause, and the three of them left to save the universe their own way.

Retrieved from "https://marvelcomicsfanon.fandom.com/wiki/Loki_Odinson_(Earth-2001)?oldid=262281"
Community content is available under CC-BY-SA unless otherwise noted.