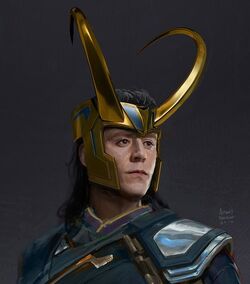 Loki Odinson, The Trickster, The God of Mischief
Identity

Well, brother... it seems I have played my final trick.

Loki was born to the Frost Giant King, Laufey, moments before his death during the great war between Asgard and Jotunheim. The Asgardian Allfather, Odin, then adopted Loki and raised him alongside his brother, Thor.

Growing up, Loki was always jealous of the attention Thor received, so he became a bit of a prankster, and eventually earned the disappointment of their father. But he didn't care. Loki knew who he was and he was proud.

He would later join the forces of Asgard to join Thor and the Avengers in an assault against Apocalypse. However, Loki, like everyone else involved, met a brutally violent end in this battle at the hands of Apocalypse. He died in the arms of his brother, and was taken to Valhalla.

Retrieved from "https://marvelcomicsfanon.fandom.com/wiki/Loki_Laufeyson_(Earth-9999)?oldid=245049"
Community content is available under CC-BY-SA unless otherwise noted.