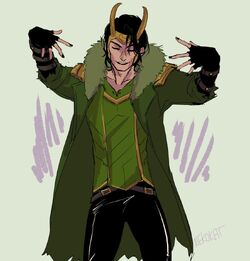 The God of Mischief
Identity

Earth-90012
Base Of Operations
The Outside
Characteristics
Gender

Please do not lump me in with those other versions of myself. I'm not a fan of a good deal of them.

The small Frost Giant called Loki was born after a long battle between the Asgardians and Frost Giants came to an end. Found in the wreckage by the Allfather, Odin, Loki was taken to Asgard and raised as a Prince alongside his adoptive brother, Thor. Loki was never too interested in inheriting the throne, unlike Thor, who seemed hellbent on proving himself worthy to their father. Loki rather felt a closer kinship with his adoptive mother, Freyja, who taught him the ways of witchcraft and trickery. He soon found himself often playing pranks on his brother and father. Although well-intentioned, Odin did not find it amusing. Hoping to discipline Loki, he banished him to the realm of Midgard so that he could live among "the animals". Loki was shocked by how different the cultures were on the two worlds, and after witnessing several atrocities committed by humanity, he decided to try and use his powers to make a difference, by simply making karma come to life on those who did wrong. He soon became a legend among the people of Earth, and came to love his new life.

Loki was eventually recruited into the Outsiders when they needed a team of heroes to repair the damage done to the multiverse by an alternate version of his father, which Loki happily obliged. After the mission was complete, Loki was also more than happy to stay with the Outsiders and continue doing good across all of reality.

Retrieved from "https://marvelcomicsfanon.fandom.com/wiki/Loki_Laufeyson_(Earth-90012)?oldid=246141"
Community content is available under CC-BY-SA unless otherwise noted.