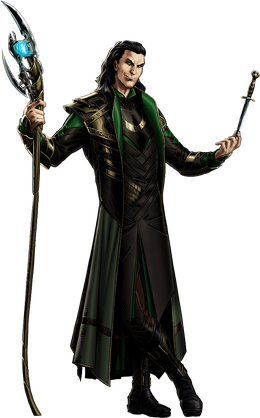 Engaged
Occupation
God of Mischief (currently)
Member of the Avengers (currently)
Education
Education on Asgard
Origin
Origin
Born an Asgardian in Jotunheim, Loki was adopted by Odin after he was just born and before his biological parents' death. He becomes a skilled magic user under the guidance of Frejya and dubs himself the God of Mischief due to his love for playing pranks.
Place of Birth
Jotunheim
Creators

I love being a hero and a trickster.

Early Life and the Avengers

Loki Laufeyson was born in Jotunheim to two Asgardians who were at war against the Frost Giants. At the time, he wasn't named due to his mother just giving birth to him and his father giving him away to Odin immediately after his birth and before dying in battle. Odin takes him back to Asgard where he named him Loki and his adopted mother, Freyja named him 'Goderich' due to her interest in human names, much to Odin's dismay which explains why Loki never used his forename upon his father's request.

As he grew up, Odin spent most of his time with his adopted brother, Thor Odinson, training him and such while Loki himself was given unconditional love by Freyja who introduced him to magic for she had mastered the art during her youth. This made Loki become enamored with magic and began to practice mastering it under Frejya's guidance but along the way, he would become mischievous and began to play pranks on the other Asgardians which most of them find entertaining while others see him as childish and irresponsible. When Odin discovers his skill, he became skeptical at first but he was later convinced when he saw Loki use his magic as a form of combat and he could be good of a warrior as Thor.

As Loki got older, Frejya passes away and he becomes a full-fledged sorcerer, naming himself the God of Mischief due to his playful nature and would often continue to play harmless pranks on people as well as Thor who would chase after him with this Mjolnir. He soon later become occasionally affiliated with the Avengers and would often help them fight all of the superpowered villains they come across such as the HYDRA and Thanos.

During his time with the Avengers, Loki meets Tommy Wilson, younger brother of fellow Avenger, Falcon and mutant who goes under the name, Thunderbird during the time when Asgard was in danger. Loki falls head over heels at first glance while Tommy saw him as immature and would avoid him after Asgard was saved and would sneak out of Asgard to accompany him despite being shot down several times by the young mutant. It wasn't until later that Loki is told about Tommy's breakup by Sam and that he was still coping with it. This made the God of Mischief take his feelings seriously and they start off as friends. After their time together, Loki confesses his feelings for Tommy, and the latter accepts. This caught the attention of Odin and makes Tommy, Loki's betrothed or in others words -- fiancé.

Retrieved from "https://marvelcomicsfanon.fandom.com/wiki/Loki_Laufeyson_(Earth-7090)?oldid=261561"
Community content is available under CC-BY-SA unless otherwise noted.