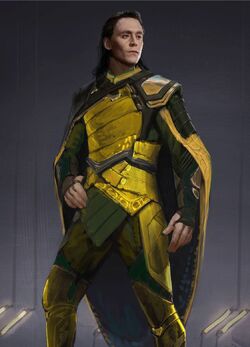 The Executor of the Makers, Reincarnated One, Loki Titanson, God of Mischief, Mister Evil, Emperor of Evil, Loki of Titan, The Mischievous Marauder, The Last Son of Jotunheim, "Death,"
Identity

Earth-61712
Base Of Operations
The Sanctuary, Sanctuary II, and The Black Quadrant; formerly Jotunheim and Titan
Characteristics
Gender

What a pity... Not even my two "brilliant" brothers could see the bigger picture I showed them. Those imbeciles just went too far into the future, yet I'm nowhere in the picture? Well, fine then... I'll do it myself...

The extremely mischievous man who was meant to be royally known as Loki Laufeyson is a Jötunn who was the biological son of Laufey, the former ruler of the Frost Giants in Jotunheim, who was abandoned and left to die as a child during the unfortunate mass extinction of the Jötunns at the hands of Surtur and his Fire Demons. Eventually found by A'Lars and his fellow Eternal colonizers, the now christened Loki, Son of A'Lars, was taken to the Eternal planet of Titan (due to the sinister secret that he was only rescued due to the Eternal High Council seeing that "collecting" the last known Frost Giant would make Titan more diverse in population among its inhabitants) and was somewhat unfairly raised by him and as an Titanian warrior, unlike Eros and Thanos, his older and younger adoptive brothers respectively.

Upon growing up into adolescence, Loki became the black sheep of the royal Eternal family of Titan, mostly due to the fact that he was adopted, though he was not yet aware of the harsh truth, at least not yet. Despite showing such innate skills and observable expertise training in Asgardian warrior arts, Loki still took an interest with sorcery. Sui-San, who was a lot closer to Loki than A'Lars was, taught Loki everything she knew about sorcery, and he eventually became an expert in countless types of magic across countless dimensions throughout the cosmos, gaining the ability to conjure illusions of himself and create weapons which he could use in training, realizing that he shouldn't rely on any physical form of weaponry but his own manifestations of it.

Sui-San regarded secretly giving Loki most of her knowledge and wisdom in magic as a way for him to prove his worth against his two brothers, despite the fact that A'Lars was secretly watching the two frequently bond in secret, much to his disdain that she would rather spend time with a Frost Giant, which A'Lars had reluctantly kept, than their biological children. Endlessly being treated by his own father, Loki could only see him as a monster who took him for granted who only used him for, to the point where he began questioning his purpose and existence altogether. Loki even contemplated ending his own life by falling off the balcony of his bedroom, only for Sui-San to impulsively save him in the last minute he tried doing so.

Broken and hopeless, Loki had found his sanctuary through Sui-San, whom the latter had unexpectedly had developed some unorthodox feelings for the young man she once thought of as a son. As another few years have followed, the two became romantically involved when Loki was already a young adult, albeit in secret from A'Lars and the rest of the royal Titanian family. On those times, Loki cherished each and every moment he had spent with Sui-San, feeling something "special" he has never felt all his life. Even Sui-San herself strongly expressed that she mostly felt loved when she was with Loki than she was with any other person, including her husband A'Lars. Some of the servants who secretly knew or even just speculated the affair were frankly quite disturbed on what was going on behind the scenes, to the point where they're not comfortable enough to tell A'Lars about it.

The only reason Thanos couldn't tell everyone anything about Loki's involvement was due to the actions of the latter gas-lighting his little brother with different types of sorcery which he learned throughout the years, cursing Thanos with a spell that could only be broken once he either dies or another sorcerer gets to figure out how to unlock Loki's complex magic. After manipulating Thanos one last time, Loki remained true to his words as possible by finally leaving Titan with the intent of finding himself after living in a world of lies, confident that he had the last laugh at the abusive and treacherous family who mostly despised him and only used him, the same family whom he grew up with.

Eventually, the mischievous influences of Loki had Thanos to come up to a deluded but cleverly convincing realization that he was not like most of his people, that he was different from other Titanian children, who his forefathers believed were the "future of the planet." Remembering the old saying, Thanos now believes that he is the future of their planet. As a result of his new perspective in his young life, Thanos used his facade of innocence to his advantage to formulate a series of plans to overthrow his family throne, to which he started by triggering a series of events that would change the course of history across the universe forever. Thanks to his mind and power of influence, the young Thanos sparked the ultimately chaotic and unstoppable Supreme War, a conflict that first began as a simple disagreement with Titan's intergalactic affairs with other planetary communities, only to grow rapidly in the form of the greatest pangalactic war in the history of this universe, since the Dark & Forgotten Invasion of the Builders.

During his conquest as a mad and delinquent Titan, both Thanos and his secret armies of darkness invaded multiple planets and slaughtered millions to gain power and influence under his command, something that would go on for years to come before most peace-keeping organization would notice the catastrophic effects that had been caused by his actions. This quest even forced Thanos to sacrifice his parents, King A'Lars and Sui-San, during a rebellious assault on Titan's solar system in order to keep his identity as the perpetrator of the Supreme War from being exposed across the civilized cosmos. With Thanos also having his own older brother Eros in exile weeks before the war began, this previous action made Thanos as the succeeding ruler of Titan by default, as he secretly planned to happen. As the war ensues in catastrophe, Loki was somewhere on the other side of the same galaxy, sadistically knowing that his ulterior motives of bringing down the Titanian family and conquering reality through the juvenile Thanos was going quite well.

Two years have passed since the Supreme War was slowly being recovered from by those who witnessed and participated it, Loki was only closest into reaching the destination of his clandestine journey to unravel the secrets of the multiversal celestial beings known simply as the Makers, which Loki personally believes would be great source of power in his new attempt to dominate the universe. Searching for the Makers through the use of different sorcery known to magic, Loki dangerously projected himself across the vastness of the unknown regions of the abyss from an undisclosed uninhabited planet. After arriving at the edge of the abyss, he (in his astral form) finds himself stranded in a sanctuary surrounded by null and darkness, only to be saved from having his soul permanently lost, saved by someone who would claim itself to be the "Lord of the Light," further claiming itself to be the highest representative of the godly Maker race.

Despite how fearful the Makers may seem to be in the eyes of an "inferior" being, Loki became an exception, retaining his behavior to be as calm and formal as possible in front of the very beings he had come searching for ages. For the sake of formality, Loki decided to bow at the council of celestials, showing them his assurance of subservience, before introducing himself as Loki Laufeyson of Titan, embracing both his biological origin as a Frost Giant and his later adoptive family, which were the Titanian Royal Family, whom he grew up with despite the hatred and torment given to him by those around him. Sensing the dedication within the trickster, the Makers came to accept Loki's service, albeit the beings would also sense the deception within the young sorcerer.

As a result, the Lord of the Light ended the meeting in subjugating Loki for treason after knowing his secret intentions of manipulating the Makers into his will using sorcery, thus exposing Loki of his true plans. Loki tried to reason out with the Makers before realizing that it proved no effect, rendering him to have other choice but try and escape the astral sanctuary and return back to his physical form. However, even a trickster's seemingly unending trick's would run out, and so was his luck. In his escape attempt, Loki's powers were barely an ant's sting to the near-omnipotent Makers, and in return, the latter used little of their power and it was already enough to immobilize the God of Mischief in his astral form. Despite this, the Lord of the Light declares Loki as one of their newfound servants, transforming his soul into something of "a greater purpose," according to the Makers, before returning his astral self back into his body, which was located at the uninhabited planet. Waking up in his "transfigured body," a reborn Loki was on the verge of a new mission under the will of the Makers: to locate targeted individuals he would only call the "Reincarnated Ones," a term that was also used on him by the Lord of the Light.

Retrieved from "https://marvelcomicsfanon.fandom.com/wiki/Loki_Laufeyson_(Earth-61712)?oldid=254962"
Community content is available under CC-BY-SA unless otherwise noted.