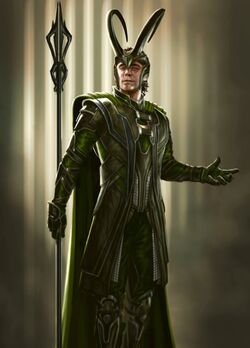 Loki Laufeyson is a Jötunn, and the Asgardian God of Mischief and Prince of Lies, the adopted son of Odin Borson and typically the archenemy of his brother, Thor. Out of jealousy and rage for not being the rightful heir of Asgard, Loki has schemed against Thor and his royal allies for ages and his cosmic meddling led to the formation of the Avengers, the Earth's Mightiest Heroes.

Before the Invasion, Loki seemed to have the same history with his Earth-61615 counterpart, up until he was able to successfully trick his first Midgardian adversaries, the Avengers, during the significant Battle of New York into fighting his mirage or illusion, while he continues to his to spread the chaos caused by his single-minded and bloodthirsty army coming through the wormhole created by the Tesseract. As a devastating consequence to his effective strategy, the invasion of the timeline itself was prolonged for more than a few weeks, longer than it was supposed to be. Even according to his own words as he tells his adoptive brother Thor, nothing could ever stop his war.

Unbeknownst to everyone, the one responsible for both his escape and his devious strategy was none other than the newborn A.I. Ultron, who also went missing not long after Loki had successfully escaped the S.H.I.E.L.D. Helicarrier, where somehow, the artificial intelligence was able to make a convincing deal with Loki to help him in exchange for getting him specific tech and equipment needed for its own schemes. As a response of gratitude, Loki agreed to help Ultron in doing so, although despite this deal, Loki was still cautious and paranoid enough to have him and his actions he discreetly be tracked by the equipment Loki had given to him in the first place.

Little did Loki even had known, however, Ultron was already one step behind since the beginning of their first meeting, working on his secret lone agenda on taking down Loki himself. Loki and several of his men was later revealed to be residing within an abandoned ancient stronghold located at underground compound in the same place he already was previously been, the city of Stuttgart, Germany. Not even the Avengers nor S.H.I.E.L.D. has known of this information, with the exception of Ultron, who had the unlimited access of the Internet in his system.

A Sting of Betrayal

For the next few days since the day New York was first infested by the massive Chitauri fleet, Loki's increased forces had now flown all over the skies of the North American plate, forcing the heroes of Earth to help the civilians evacuate to safety. That was until, he suddenly realized that he made a grave mistake when on the seventh day, he experienced the sting of betrayal at the hands of Ultron, who was able to close the portal opened by the Tesseract in New York after destroying it using the Destroyer Armor Prototype Gun to against, used by Ultron as a way to avenge Phil Coulson's death at the hands of the God of Mischief.

After discovering the latter's betrayal, Loki went into a fit of rage, commanding half of his roaming hostile fleet to search for Ultron's location while he alone came to desperately find his brother wherever they were at the time, regarding the actions of the machine, Pym and Thor had unintentionally created. Later on at that day, Loki was somehow able to find Thor alone, inside the abandoned S.H.I.E.L.D. Crater Investigation Site, located at New Mexico, where he first found the Mjolnir on Earth.

There, the two peacefully confronted each other for a moment, with Thor still trying to beg Loki to leave his unrighteous ways and end the assault on Earth as it still continues, though it was nearing to come to an end now that the Tesseract-powered portal was destroyed with the Tesseract itself, believing that he deserves a second chance back in Asgard after he and the Avengers are finally finished in taking down the remaining fleet of the Chitauri and the Outriders.

Thor still tried to convince Loki to help them stop the ending threat and go home to Asgard, but Loki was so enraged by his failure of obtaining the Tesseract for his mysterious benefactor, he impulsively attacks his own brother with the Scepter with the intent of killing him, to which Thor had no other choice but to defend himself and apprehend Loki through force, causing the two to brutally clash. In the midst of their battle, Loki was able to successfully overpower Thor, thanks to the equivalently-powerful Scepter, mortally injuring the latter in the process as he falls into the ground.

With his brother's struggling breath, Loki listened to his brother's pleas to change his ways, only for him to taunt Thor that he was never the rightful heir of Asgard after all, vowing to rule Asgard once he was able to get his hands on their father Odin and kill him with his own hands, just as he would do the same to Thor at that moment. In Thor's final moments, Loki aims the Scepter at Thor's chest, pointing straight to his heart ready to impale him with it, instead of brainwashing him. However, little did Loki had realized, that he was already falling into another trap for a second time and before he could have pushed the Scepter through Thor's heart, he felt that his chest was too physically indestructible.

A "dying" Thor smiles in response, before comically questioning him how could a trickster deity like him could get tricked for the second time. That was the very moment Loki had only realized, that whoever was in front of him not Thor at all. Failing to immediately realized the trap he had fallen into, Loki was too late to defend himself in time when he was suddenly stabbed from the back by someone who was revealed to be with "Thor" the whole time using a metallic shrapnel, revealing for the attacker to be Ultron himself, in his ultimate synthetic form, while the "Thor" whom Loki had faced was just a prototype of his newly-invented and modified Life-Model Decoy.

Before dropping Loki to the ground, Ultron recalls when Loki had murdered Coulson in cold blood back at the Helicarrier, telling him that this act of his was for avenging his death. Mortally wounded, the dying Loki could do nothing but stare at the vengeful machine with a hauntingly terrified look. Loki tries taunting Ultron at his last breath, mocking that he would never be a hero, nor be remembered as one no matter how he do. In reply, Ultron simply responded that he never intended to, since he just wanted to retain peace on Earth from great threats like him, along with his "master," whom Ultron had already find out through the Tesseract before destroying it. Shortly afterwards, Ultron picks up the Scepter one last time, brutally & unhesitatingly using it to "put Loki out of his misery," finally slaying the fallen God Mischief for good.

Retrieved from "https://marvelcomicsfanon.fandom.com/wiki/Loki_Laufeyson_(Earth-61615.8)?oldid=252618"
Community content is available under CC-BY-SA unless otherwise noted.