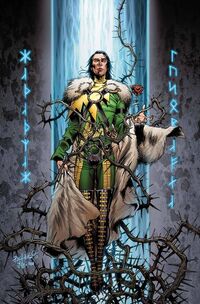 Loki the God of Mischief
Identity

Loki was the born in Jotunheim and the son of the Frost Giant; Laufey. After Laufey was killed in the end of the great war between the Asgardians and the Jotuans. Odin, Laufey's killer discovered Laufey's offspring Loki and decided to take him and one day use him as a symbol for unity between the Asgardians and Jotuns. Odin never told Loki of his heritage. 10 years after being discovered, Loki witnessed the birth of his younger brother Thor.

When Loki and Thor had matured the two at night used to sneak off to Jotunheim and battle Jotuns. Eventually Odin discovered the boys' arrogance and was angry because of the threat of war and so as punishment, Odin stripped them of their powers and banished them to Earth. After a few months of living on Earth, the two brothers had bonded and learned a new value of life. Odin, seeing the boys had learned their lesson, allowed them back into Asgard and relieved them of their punishment. After being granted his powers back, Thor had fallen in love with a woman named Jane Foster and also saw the outlaws on Earth and wanted to make it a better place and so he left Asgard to protect Earth alongside its other heroes, Loki stayed in Asgard.

One day, Odin decided to tell Loki of his Frost Giant heritage. Loki was enrage by this news and felt cheated and enraged, Loki decided to recruit Jotuns and overthrow Odin. Loki accomplished this task and became the new ruler of Asgard, Loki turned Asgard into an arctic wasteland suitable for his Jotun subjects. After 3 weeks of his tyrannical rule, Thor arrived demanding to know why Loki would do this, Loki explained to Thor of his heritage and attacked him. The two fought but Loki ultimately lost to his superior brother, Loki was not ready to be defeated and teleported away from the scene. Loki wanted to form a team of villains to destroy his brother once and for all and began his search for possible recruits.

Superhuman Strength: Loki possesses a formidable strength as a result of his Jotun lineage, that is comparable to his Asgardian contemporaries. He kicked a man several yards into a wall, and has thrown another across a room and through a window. His strength also extends his ability to leap distances far in excess of human capability.

Superhuman Reflexes: Loki has enhanced reflexes that allowed him to catch an arrow shot at him while flying a high speed Chitauri aircraft without looking at it, although Captain America was able to match him in terms of speed when the two fought.

Superhuman Durability: Loki's body possesses an extremely high durability allowing him to withstand several blows from Thor, hit by a lighting attack from Thor, and even to survive repeated battering from the Hulk bodily slamming him into a tiled floor. He also has an extremely high tolerance for cold as demonstrated by his lack of discomfort while in Jotunheim.

Superhuman Longevity: Loki has the capacity to live for thousands of years. Loki was a baby at the end of the last great war between the Asgardians and the Jotuns over a thousand years ago and is now in the physical appearance of a human male in the prime of life.

Sorcery: Loki has an extensive knowledge of Asgardian magic. He was able to use his magic to mask his presence from Heimdall while he was in Jotunheim, make himself invisible to the S.H.I.E.L.D workers when trying to lift Mjolnir, and can travel between dimensions without the use of Bifrost. He can influence the minds of others.

Loki is a cunning strategist and highly intelligent. He has shown that he is able to understand, learn and eventually utilize Earth technology to an excellent degree, such as using the eye device on the scientist, and learning to use the device that controls the cage.

Arcane Lore: Loki possesses great skill in wielding mystical artifacts, notably Odin's staff. He also has a great deal of skill in his use of arcane lore. He uses his knowledge primarily to conjure illusions and manipulate others to do his will. As ruler of Asgard he also gained control of the Destroyer for a time.

Expert Combatant: Loki has extensive combat training that allowed him to fight off and kill several Jotuns in Jotunheim, defeat several S.H.I.E.L.D. operatives, and hold his own against Thor and Captain America for a time, the latter even commenting on his fighting skills.

Retrieved from "https://marvelcomicsfanon.fandom.com/wiki/Loki_Laufeyson_(Earth-1315)?oldid=199895"
Community content is available under CC-BY-SA unless otherwise noted.