Marvel Fanon
Register
Don't have an account?
Sign In
Advertisement
in: Characters, Templated Articles, No Dual Identity,
and 14 more 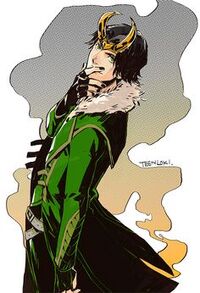 Red (when in Frost Giant form)

White (when in Frost Giant Form)

Loki was born to the King of the Frost Giants, Laufey a few months before the end of the Frost Giants' reign of Earth, known as the Ice Age. When Odin and the Asgardians came to Earth and went to war with the Frost Giants, Loki's father was killed by Odin, Odin discovered the infant Loki and performed a spell on him to give him the appearance of an Asgardian and took him back to Asgard and raised him as a son.

Growing up, he was often in his brother, Thor's shadow. Although this frustrated him at times, Loki loved Thor, who he believed to be his biological brother dearly and vice versa.

Discovering of his heritage

While on an adventure with his adoptive brother Thor and the Warriors Three in Jotunheim. While fighting Frost Giants, he discovered to be resistant to their ice abilities and noticed his skin turning blue before quickly returning to his enchanted skin color.

Upon returning to Asgard, Loki confronted his father and Odin revealed the truth to him. Emotionally distressed and suffering a form of breakdown, Loki attempted to kill Odin to which he was stopped quickly by Thor. For his treachery, Odin banished Loki.

Eons later, in 1945, while Odin was in the Odinsleep, Loki returned to Asgard led an attack on Asgard with a coalition army of Frost Giants and Nazi soldiers against Asgard, Thor and a young Asgardian warrior by the name of Lady Sif helped him in stopping this attack, although many Asgardians died because of this. Grown tiresome of war and death and the heartbreak of his brother's betrayal, Thor decided to leave Asgard and head to Midgard. Loki was later imprisoned in an Asgardian prison

Superhuman Strength: Loki, without the aid of anything, through his own biology, possesses superhuman strength that is substantially superior to that of an average Asgardian male. He possesses sufficient physical strength to lift up to 50 tons.

Superhumanly Dense Tissue: Like Asgardians, Loki's bodily tissues have roughly 3 times the density of the same tissues in a human being. While he has the looks and physical proportions of a much smaller person, the increased density of his body actually makes him several hundred pounds heavier than he appears. This increased density also contributes to his superhuman strength to a limited degree.

Superhuman Durability: The tissues of Loki's body are superhumanly durable and are roughly equal to those possessed by the average Asgardian male. However, at times, Loki had imbued himself with magical abilities that enable him to withstand injuries that would prove fatal to another Asgardian if hit. He is able to withstand high caliber bullets, falls from great heights, powerful impact forces, exposure to temperature extremes and powerful energy blasts without being injured.

Regenerative Healing Factor: Like all Asgardians, Loki, although he is inhumanly durable, at least by human standards, can still obtain injury, also like all Asgardians, his metabolism enables him to rapidly regenerate damaged tissue much faster and more extensively than a human being. However, through the use of his sorcery, Loki's ability to heal himself is far above that of other Asgardians. His magical energies are so imbued into his body that he can reattach severed limbs and, while still a male, even reattached his own head at least once.

Superhuman Stamina: Loki's Frost Giant metabolism grants him superhuman levels of physical stamina in practically all activities. He can exert himself at peak capacity for about 24 hours before fatigue begins to impair him. However, much like his physical strength and durability, Loki can temporarily augment his stamina through magical means.

Superhuman Longevity: Like all Asgardians, Loki ages at a far slower rate than humans.. Loki is immune to the effects of all known Earthly diseases and infections.

Sorcery: Loki has the ability to generate and control a great quantity of mystical abilities for a variety of purposes, of which can be used to further enhance or augment his physical diagram, like his speed, strength, and stamina, but only temporarily. His magical abilities are equal to Karnilla, the most skilled sorceress on Asgard.

Genius Intelligence: Loki has a genius level intellect and possesses a great deal of knowledge of the mystic arts. He is also extremely cunning and skilled, an expert battle strategist, and highly skilled and charismatic manipulator.

Allspeak: Thanks to the Allspeak Loki can communicate in all of the languages of the Nine Realms, Earth's dialects, and various alien languages.

Skilled Combatant: Loki is a formidable combatant in his own right, particularly as a swordsman or in the use of his various energy manipulative powers in combat situations, enough to hold his own against Thor on numerous occasions and beat the Disir into (literal) submission.

Magic limitations: Loki's powers are believed to at least be slightly weaker on Midgard than on Asgard, as his birth was not of Gaea, and even Odin's magic was on the wane on Earth. Also, while apparently possessing some extrasensory abilities that resemble psionic powers, Loki can not directly read the minds of other beings, nor can he control their actions.

Superiority inferiority complex: Loki's ambition has proven to be his greatest flaw, as his passionate hatred of Thor, lust for power, and his tendency to alienate himself through his ignoble actions greatly impedes his ability to bring his well laid plans to fruition.