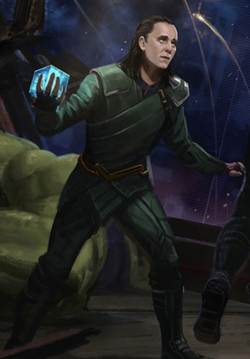 My betrayals have become quite deliciously predictable. Who knows who I'll side with this time? Not me. Aren't we all just shaking with anticipation?!

Born to the Frost Giant King, Laufey, after a lengthy and bloody battle between the Frost Giants and the Asgardians, Loki was abandoned in a small village on Earth. However, he was found by the Asgardian Allfather, Odin, whose touch imbued Loki was Asgardian magic, allowing him to alter his appearance at will. Entranced with the infant, Odin took him back to Asgard.

Loki was then raised alongside his adopted brothers, Thor and Balder, unaware that he was not related to them by blood, despite having next to nothing in common with them. Loki was always more interested in studying the lore of the Nine Realms and practicing sorcery with his mother, Freyja, while his brothers were constantly focused on training for battle.

As they reached adulthood, Loki earned himself the title of the God of Mischief, due to constantly using his mystic powers to play pranks on his family and friends. As his power grew, so did his knowledge. He began to notice the differences between himself and common Asgardians. Eventually, Loki uncovered the truth about his heritage and, feeling betrayed and lied to, began scheming.

He formed an alliance with a horde of Frost Giants so that he could frame Thor for an act of arrogant belligerence, resulting in Odin banishing him to Midgard. Loki then manipulated Balder's grief and convinced him to venture out into the Nine Realms to "find himself". He then waited for the perfect moment when Odin collapsed into the Odinsleep, and Loki enchanted him with a spell to keep him comatose.

It was then that Loki claimed the Throne, almost instantly infesting Asgard with Frost Giants so that he could kill them all and Asgard would view him as a hero. However, he did not count on Thor's return, after he regained worthiness over his hammer, Mjolnir. In the ensuing battle, Loki managed to escape through the Bifrost, transporting himself across the galaxy.

After arriving in an unfamiliar place, Loki was found by the Mad Titan, Thanos, who, in turn, manipulated Loki's grief and tortured him into joining the Black Order. His first mission was to go to Earth and lead an army of Chitauri to obtain one of the Infinity Stones.

His mission ended up being a failure, which Loki saw as a blessing. He used the chaos to fake his own death and insert himself among the people of Earth so that he could return to his simple days of trickery and make like miserable for his brother and his newfound compatriots, the Avengers.