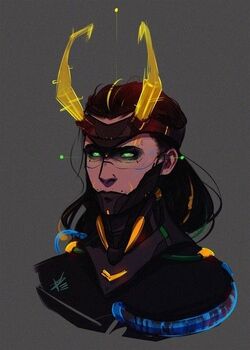 The God of Mischief, The God of Planning Thanos's Evening
Identity

I was a fool to believe I could stand against you, my Dark Lord.

Loki was a Frost Giant who was raised as the Prince of Asgard, later discovering his true heritage and deciding to become a scourge on the Nine Realms. His status as an enemy of the Avengers eventually attracted Thanos's attention, he enlisted him into the Black Order.

Eventually, Loki grew terrified of Thanos's power and attempted to betray him. Loki would go on to regret this decision, as Thanos had him tortured and cybernetically enhanced in a very similar fashion to that he used on Nebula.

Following Thanos's ascension to the Emperor of the Universe, Loki has become Thanos's right hand man and favorite servant.

Retrieved from "https://marvelcomicsfanon.fandom.com/wiki/Loki_Laufeyson_(Dimension_0)?oldid=263482"
Community content is available under CC-BY-SA unless otherwise noted.