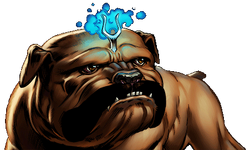 Lockjaw is the loyal companion of Crystal and the rest of the Inhuman Royal Family. Almost nothing has been revealed about Lockjaw's early history.

Lockjaw's first encounter with a superhuman from the human world was Johnny Storm of the Fantastic Four. The Inhumans left their hidden city in search of Medusa. They met when he was searching for Crystal, mistakes Johnny for an Inhuman and decides to take Johnny back to her home. Lockjaw is first introduced as Crystal’s pet. Lockjaw's forked antennae on his brow, which generates a charge of energy. The energy opens up a portal to Crystal’s homeland and the three enter the rift. He is introduced to the other Inhumans but a fight breaks out. The Fantastic Four arrive to help, but during the battle it is revealed that they are in hiding from another Inhuman known as the Seeker. However Seeker arrives in New York seeking the missing Inhumans. Lockjaw and the Royal Family of the Inhumans returns to their home land, of Attilan. The reigning king, Maximus, learns of their arrival and unleashes the Alpha Primitives to combat them. Maximus is the brother of Black Bolt. Black Bolt flies directly into the Primitives sending them scattering. After a brief battle, Maximus enters the chamber and apologizes for the effrontery. He claims that the Alpha Primitives had escaped on their own. Realizing that he cannot hope to win out over Black Bolt's courageousness, Maximus hands the crown of leadership over to his brother.

Lockjaw possesses great physical strength simply from size alone. Due to his canine physiology he is limited to what he can pick up by its shape, that is, whether he can hold it with his mouth. His mouth, however, is unusually large, as is his head, which is about 40 inches from flews to dome. His jaw strength is such that he once clamped onto the Thing's hand and the Thing was apparently unable to free it. Lockjaw possesses sufficient strength to support 3,600 pounds on his back and still be able to walk, as well as the power and physical toughness to dig through ferro-concrete with his paws.

Canine Urges: Lockjaw often suffers from canine urges. These often take the form of the desire to chase animals.

Speech Difficulty: Lockjaw can only speak with extreme difficulty.

Limited Manipulative Abilities: Being a canine, Lockjaw can only pick up or otherwise manipulate what he can fit his jaw on.

Retrieved from "https://marvelcomicsfanon.fandom.com/wiki/Lockjaw_(Earth-1010)?oldid=255466"
Community content is available under CC-BY-SA unless otherwise noted.