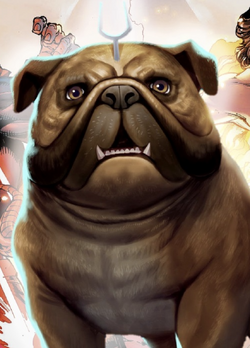 Lockjaw was experimented on by the Inhuman Royal Family when he was just a puppy. The special breed of Terrigen resulted in Lockjaw developing Inhuman powers of his own, allowing him to teleport from any distance across the galaxy.

Eventually, when Black Bolt and Medusa ascended to the throne, they brought Lockjaw into their family and pampered him to make him feel comfortable, and to make up for the experiments he went through as a puppy.

He later became very close with Princess Crystal, who spent all of her spare time with him. As the Inhumans began to become more involved in Earth politics, Lockjaw was overjoyed to do whatever he could to help.

Super Strong for a Dog

Retrieved from "https://marvelcomicsfanon.fandom.com/wiki/Lockjaw_(Earth-101)?oldid=250212"
Community content is available under CC-BY-SA unless otherwise noted.