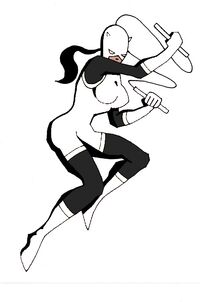 Lindsey Murdoch has a good life. She had a fairly settled family, despite the fact that both her mother and father were super-heroes. Her dad loved raising her, but most of her care-taking fell to her mom, since her dad was still trying to topple the Kingpin. But when her mutant powers erupted, Iron Knight and the Captain recruited her into the new Avengers. She misses her family, but is happy to finally be a hero like her mom and dad.

Lindsey was born to the vigilante Daredevil and the ninja Elektra. Her mom was so awed by her at birth, that she decided to become a stay-at-home mom. Daredevil wanted the same, but he had to still work as a lawyer, and Hell's Kitchen still needed Daredevil. So, she was mostly raised by her mother, and she looks fondly on both parents.

As a child, she was trained in martial arts by her mother. She also was trained how to throw objects, mostly bladed ones such as sais. She had superhuman senses since childhood, but was able to adjust to them. As she harnessed her power, she decided that she wanted to patrol with her father. He agreed, as long as she stayed with him. That night, the Ghost first made an appearance (then named "Devil's Advocate"). But when she decided she was ready to face Kingpin, DD sent her home. He vowed that he would deal with her later.

Returning home grudgingly, she was yelled at by her mother. She wanted to scream, and she heard herself screaming, but it was actually a psychic projection. Her secondary mutation was manifesting. Her mother bent over, writhing in pain. Her father heard the scream, and returned home, only to react the same way. She ran away, now frightened by more power she couldn't yet control, and she ran straight into the Captain. Iron Knight was forced to knock her out. When she came to, she was in a lab, and she saw her parents with the new Avengers. They were consulting with DD and Elektra, asking her to join the Avengers. They agreed, but then Ghost broke free, and barged out, yelling. However, it happened again, and she promised to join the Avengers, if only to control her new powers, and protect the ones she loved.

Primary Mutation: The first mutation that gave her her powers from birth.

Radar Sense: She has used this ability to see things in her environment while blindfolded.

Telepathy: Ghost can use telepathy for the following applications:

Telekinesis: Able to use telekinesis for these effects:

Ghost has been trained in combat since age 8. She has defeated her mother in hand-to-hand, showing much martial arts prowess. She is also a skilled marksman, particularly with thrown weapons like sais.

He possesses the normal human strength of a man his age, height, and build who engages in moderate regular exercise.

Equipment: None known.
Transportation: None known.
Weapons: Ghost carries a set of billy clubs and sais on her whenever she goes into battle.