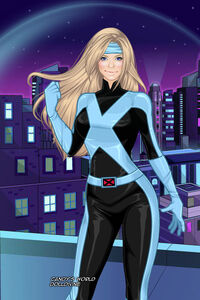 A direct descendant of the Strucker Twins the enemies of the X-Men Lillian Strucker becomes a hero in her own right alongside her twin brother Andre. Gifted with the power create shields Lillian can also combine with her brother Andre to create a powerful shield binding Andre's amazing Telekinesis. Her father Oliver Strucker has the Fire Ability powers while her mother Andrea is pure human but stands by her children 10,000%.

Force Field Generation: This ability allows Lillie to collect and bind energy and atoms together, which in turn create transparent force fields and barriers that can cut through solid objects, as well as push them away. Her force fields are strong enough to deflect bullets and push away oncoming cars. She has demonstrated a full understanding of her abilities, using them in both offensive and defensive settings. Using her force fields, Lillie is capable of manipulating matter in such forms as water and air. She has complete control including expanding her force fields

Fenris Force: When making physical contact with her brother, they glow with a yellowish energy and can fire a destructive wave of energy that is a combined force of their powers.

Retrieved from "https://marvelcomicsfanon.fandom.com/wiki/Lillian_Strucker_(Earth-16160)?oldid=243096"
Community content is available under CC-BY-SA unless otherwise noted.