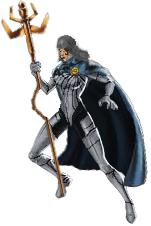 For the greater good of the Empire... Sacrifices must be made!

Lilandra has the same early life as her Earth-616 counterpart.

Lilandra, fearing her brother D'Ken's thirst for power and his attempts to tap into the M'Kraan Crystal, decided to openly oppose him. Lilandra got intergalactic support from S.W.O.R.D. and the Nova Corps, who sent the X-Men and the Guardians of the Galaxy respectively. The Princess was impressed with Phoenix's prowess and asked her to go face the Emperor with her. However, during the fight, the Phoenix Force's dark influence started to affect Jean, who disobeyed Lilandra and left her brother incurably insane and catatonic. The now Majestrix Lilandra ordered her guards to execute the mutant, but she teleported away with her teammates.[1]

Lilandra, bitter over Phoenix's challenge to her authority, flew to Earth to exact revenge on her. When she was informed by Professor X that Jean had left the Mansion, she decided that all mutants were going to pay. During the battle, she attempted to kill Cypher with her spear, but was stopped by former Shi'ar slave, Warlock. After engaging in a brief battle with Cyclops, the Dark Phoenix appeared and Liliana witnessed her turn into the White Phoenix of the Crown and eventual demise. Once she felt her score was settled, the Majestrix left Earth.[2]

Lilandra possesses the normal strength of a Shi'ar woman who engages in intensive regular exercise, She can lift (press) over 1 ton.

Equipment: Often wore a form-fitting battle armor and carried an energy sword. As Majestrix, Lilandra carried a multi-pronged staff, but it was unclear if this staff was a weapon or purely ornamental.
Transportation: Shi'ar starships, intergalactic-range Stargates.
Weapons: Various Shi'ar energy weapons and laser swords.

Retrieved from "https://marvelcomicsfanon.fandom.com/wiki/Lilandra_Neramani_(Earth-1010)?oldid=204706"
Community content is available under CC-BY-SA unless otherwise noted.