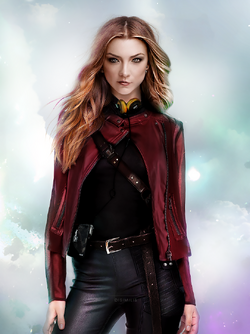 Earth-101
Base Of Operations
The Argonaut
Characteristics
Gender

I know you wanted me to be your perfect little princess, but that's not who I am!

Lilandra Neramani is the second child of J'Son, but the first to be born of pure Shi'ar blood. She was raised to one day take over his role as Majestor of the Shi'ar Empire, much to her sister, Cal'syee's disdain.

As she grew older, Lilandra became disillusion with the oppressive nature of the Shi'ar Empire. She investigated her father's past and discovered that the infamous Star-Lord is actually his son. She decided to go on the run and become a ravager to see what life was like for him on the other side.

Adopting the name Gladiatrix, partially to honor and partially to mock the Shi'ar's Gladiator, she quickly became one of the fiercest solo ravagers to ever roam the galaxy.

She was eventually roped back into her family drama when she was recruited by the Guardians of the Galaxy to help liberate Star-Lord from J'Son's clutches. With this as the first meeting between siblings, Peter and Lilandra instantly found themselves getting along. She decided to continue going at it alone to prove to herself that she could, but took solace in knowing that she had a family with the Guardians.

Retrieved from "https://marvelcomicsfanon.fandom.com/wiki/Lilandra_Neramani_(Earth-101)?oldid=255282"
Community content is available under CC-BY-SA unless otherwise noted.