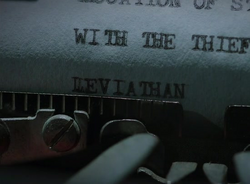 How long has Leviathan been active?
Since after the Great War."

Founded after World War I on the order of Joseph Stalin, Leviathan was formed to ensure that the Soviet Union would become the world's leading superpower by having better weapons than its enemies and allies.

The Red Room project trained young girls as spies and assassins who would become full operatives when they reached adulthood.

In 1944, Fyodor, a member of the Soviet Armed Forces, greeted four men, including Ivchenko, whose heads were covered with hoods and were bounded to chairs to the service of Leviathan. He gave each man the option to leave the organization; Pasha voiced his desire, citing that he had a wife and four children. Fyodor commanded a woman to "free him of his bonds"; she killed Pasha as Fyodor explained that Pasha's family will be killed shortly to reunite them all. The three remaining men became loyal to Leviathan.

Some Leviathan operatives have their vocal cords disabled, leaving them with a Y-shaped incision on their neck and preventing them from speaking without the use of a Voice Synthesizer. These operatives were present when at the Battle of Finow, Midnight Oil was used; their voice boxes were damaged because of the gas and removed. Missions are given to agents and communications are returned through the Remote Typewriter.

Leet Brannis was an operative of Leviathan, but decided to go solo. He went to the illegal trader named Spider Raymond and received a packet of money in exchange for property stolen from Howard Stark. When a man in a green suit went to Raymond to claim the Nitramene bomb, he killed the fence as he searched his safe for it.

Brannis revealed the existence of the organization to Peggy Carter by telling her, "Leviathan is coming." She had noticed that Brannis and the assassin who killed her roommate Colleen O'Brien both had their larynx missing. He also told Carter that he and Green Suit were no longer allies.

Edwin Jarvis researched Stark's files but found nothing pertaining to Leviathan. Carter went to hospitals, but did not find any records of men with a laryngotomy operation, concluding that Leviathan operatives were foreigners.

When Brannis was captured by Carter and Jarvis, he asked for protection from his former employer.

Drawing a heart-like shape in the dirt, Brannis died before revealing more information to Carter about the organization.

The Strategic Scientific Reserve researched the backgrounds of Leet Brannis and the Man in the Green Suit, learning that they were both in the Soviet Armed Forces, but the agency did not connect them to Leviathan.

Ivchenko came to the United States with Peggy Carter after she freed him from a prison in Belarus. He told the Strategic Scientific Reserve the story on how Leviathan captured him, without revealing his loyalty to the organization. When they were alone, he tried to get Chief Roger Dooley to look out his office window; Dottie Underwood was stationed across the street with a high-powered rifle. Dooley would not come to the window, so Ivchenko changed Underwood's order to target Peggy Carter. He then learned all he could about the whereabouts of Howard Stark's inventions from Agent Yauch before having him commit suicide.

Ivchenko procured a weapon of Howard Stark labelled by the Strategic Scientific Reserve as Item 17; he caused the death of Chief Roger Dooley in the process by having him wear an Self-Heating Vest. Dottie Underwood tested the effectiveness of the weapon by releasing it in a movie theater. Everyone attacked each other until there were none alive

Retrieved from "https://marvelcomicsfanon.fandom.com/wiki/Leviathan_(Earth-1010)?oldid=136185"
Community content is available under CC-BY-SA unless otherwise noted.