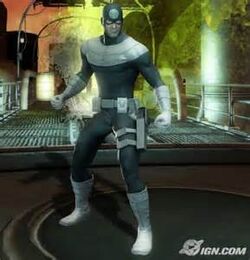 Little is known about Bullseye's life before the formation of the Masters of Evil. It can be assumed to be similar to his mainstream counterpart.

Bullseye had joined the Masters of Evil and was a member of the assault force that attacked the Helicarrier, leading a group of Ultron Drones to the base's missile systems. Nick Fury sent the Ultimate Alliance to stop the missiles from launching, but Lester managed to fire one of the missiles at New York City anyway. The Ultimate Alliance, including Daredevil and Elektra, battled and defeated Bullseye, taking the missile control keys from his unconscious body and disabled the bomb. Bullseye was then taken into S.H.I.E.L.D. custody.

During the Superhuman Civil War, Bullseye had nanites implanted in him and forced into the Thunderbolts. Bullseye fought in many battles and helped Venom, Green Goblin, and Lady Deathstrike destroy the Geffen-Meyer Chemical Plant when the nanite network gained sentience. He later helped the Green Goblin detonate a bomb to distract the two sides fighting in the Negative Zone Prison so Moonstone could attack Iron Man. Bullseye was one of the founding members of the Fold, and was battled in the prison by the reunited Ultimate Alliance. He was freed when the signal was shut down and Nanite Nick Fury was defeated.

Equipment: Adamantium-laced Bones
Transportation: formerly S.H.I.E.L.D. vehicles
Weapons: Any object in Bullseye's hands is a potential weapon. However, he will often use guns and knives as well as a number of throwing weapons such as shuriken. Before Elektra's resurrection, he would often carry one of her sais and use it simply to spite Daredevil.

Retrieved from "https://marvelcomicsfanon.fandom.com/wiki/Lester_(Earth-6109.2)?oldid=128673"
Community content is available under CC-BY-SA unless otherwise noted.