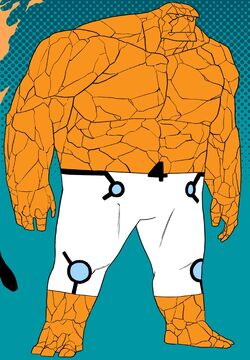 No Hair, formerly brown
Unusual Features
Appears to be a male, and sometimes just a rock, due to the rock armor drawn around her at all times.
Status
Citizenship

Single
Occupation
Adventurer
Origin
Origin
Geokinetic superhuman who founded the Fantastic Four in 2099 and journeyed to the present to replace the deceased Four.
Creators

I'm barely human anymore, let alone being seen as a woman. I'm a freak, and all that stands between me and other mutant trash is the 4. I've considered suicide, but I never can. The rocks are the reason I'm so awesome and so awful. Ironic, isn't it?

Leslie Munroe was born into a supposed line of African sorceresses. She never believed in magic, though, and was shunned by her family. In the futuristic era of the 2070's, she found it even harder to believe that superhumans were existent, but she thought mutants made total sense. But her belief in mutants and their place on Earth lost her everything: her apartment, her job, everything. She soon resorted to living in a box on the streets. This stress activated her mutant powers, and she soon caused earthquakes uncontrollably. This made her a pariah, and she was soon chased from her town.

In the wild, her power became even more uncontrollable. She soon shattered most of the mountains near her home, and her power grew even more extreme, causing the rock to attach to her. This would make her appear as a giant rock humanoid, sometimes even just looking like a giant rock. She decided to seek out a doctor who she suspected could cure her. Using 5 rounds of elephant tranquilizer, and a huge medical laser, he was able to cut beneath the surface of her skin and install small implants in her muscles. These would not entirely remove the rock, but guarantee that she had greater control over it, always remaining humanoid. In thanks, she agreed to join with 3 other of the doctor's patients who had developed superpowers as side effects. They together became the Fantastic Four.

This was not to last, however, for though there were many good years of active crimefighting, their popularity had begun to dwindle. Fights were less frequent, given the high numbers of super-heroes, and the small number of villains. But soon the 4 were approached by one of 2099's greatest saviors: Kang. He told them that the original 4, the ones inspiring their formation, had died in the crash that should have given them their powers. They were informed that if they went back in time to replace them, the damage done to the timestream would be reduced. All were in favor of it, and though warned by Kang, she went through the potentially mutating portal. The effects of her surgery were reduced, and she barely appeared female anymore. Accepting that at least she looked human, the Thing became the strongest member of the new and improved Fantastic Four.

Geokinesis: Thing's main power is her mutant ability to manipulate earth and rock to her will. She can ride waves, or cause the Earth to shudder, creating earthquakes, and she has minor control of magma as well.

Time Travel: All members of the Fantastic Four have the ability to travel between the present day and 2099.

Retrieved from "https://marvelcomicsfanon.fandom.com/wiki/Leslie_Munroe_(Earth-5)?oldid=163537"
Community content is available under CC-BY-SA unless otherwise noted.