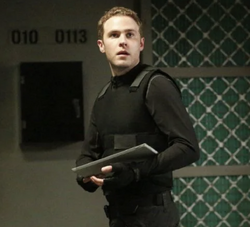 I think it's a very noble thing, what the Avengers are doing, trying to change the future and everything, it's just, I don't know, I'm sorry, it just can't be done. Quantum Physics states that time is immutable. It can't be changed.

Leo Fitz enrolled in the S.H.I.E.L.D. Academy right out of High School, where he met and fell in love with Jemma Fitz-Simmons. However, he was too shy to tell her, and settled for being best friends.

They eventually earned themselves a reputation as the brains, constantly being referred to as "Fitz-Simmons". They were eventually selected to join Phil Coulson's team, where they worked in close quarters with each other and other S.H.I.E.L.D. agents who they became close friends with.

Over time, Fitz and Simmons came to admit their feelings for each other, and eventually went on to get married. They also joined Coulson when their team evolved to support Quake and her team of Secret Warriors. When Fitz learned that Simmons was pregnant with their son, he tried to convince her that they needed to retire from S.H.I.E.L.D., but she refused, claiming Coulson and the Secret Warriors needed them. Even after their son, Charlie, was born, Fitz was constantly nervous about the danger they put themselves in, but never hesitated to go through with his duties.

Retrieved from "https://marvelcomicsfanon.fandom.com/wiki/Leopold_Fitz_(Earth-101)?oldid=249054"
Community content is available under CC-BY-SA unless otherwise noted.