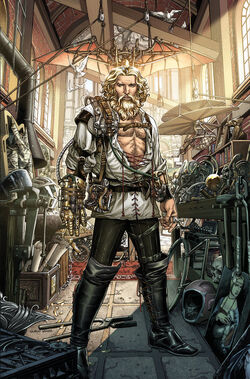 Leonardo da Vinci (literally, "Leonardo, from Vinci") was born in Vinci, Republic of Florence, the son of simple parents.

During the Renaissance, he became a polymath: painter, sculptor, architect, musician, mathematician, engineer, inventor. His genius, perhaps more than that of any other figure, epitomized the Renaissance.

Among his works, he wrote some notes for a steam engine.

Genius: Leonardo is an inventive mechanical engineering prodigy, constantly creating new technology and looking for ways to improve it. His intelligence is classed as above genius. He is one of the smartest people who ever lived.

Expert Engineer: He is an excellent engineer and mechanic capable of fixing almost, if not all, any machinery.

Expert Tactician: He is a brilliant tactician capable of quickly formulating battle strategies and new plans should the situation changes.

Has the strength of a normal human, he also engages in moderate regular exercise.

Ennilux possess in its vaults an unknown thing from da Vinci.

Retrieved from "https://marvelcomicsfanon.fandom.com/wiki/Leonardo_da_Vinci_(Earth-1010)?oldid=243095"
Community content is available under CC-BY-SA unless otherwise noted.