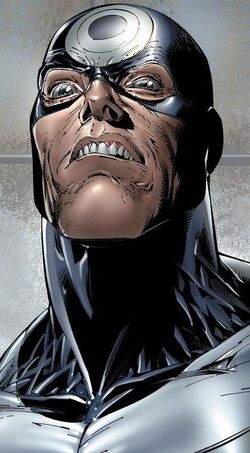 Wait... Did you seriously just miss?

Leonard Jangles was highly-skilled but also an observably unpopular government agent and former police officer with an uncanny talent for accuracy, almost as, but not fully matched as the infamous mercenary for hire and long-time adversary of the vigilante Daredevil known as Bullseye. However, during the gang wars against most of New York's most notorious criminal organizations, Jangles had been revealed to be secretly working with the Kingpin of Crime himself, Wilson Fisk, for some length of time and had been manipulating the Daredevil of Hell's Kitchen, along with some of New York's most courageous vigilantes including the heroic couple Black Cat and Spider-Man, to do the mastermind of New York City's own doings.

During the days of Ultimate War, Jangles was revealed to be a secret participant who joined the secretly emerging Movement Alliance, introducing himself a clandestine member of Kingpin's Criminal Empire, having to be known with his past ties with Wilson Fisk in his crusade against both the Daredevil and even Matt Murdock himself, in an attempt by trying to scar his life forever.

During the days of the conflict, Jangles was present at one of the few main hidden headquarters of Fisk's criminal organization across the city of New York, with Daredevil and the rest of the Defenders not immediately realizing that the sadistic mercenary had his own personal vengeful agenda against the vigilante without the need to face him, by hunting down each and every one of Murdock's loved ones.

Under the great command of the Kingpin himself, Jangles became a lieutenant and led his own tactical unit to terrorize several known landmarks across Hell's Kitchen, Harlem, and the Financial District of Manhattan, only to be eventually intervened by the miraculous arrival of the whole roster of the Defenders, their overall diabolical actions from worsening even further that they would have anticipated in the first place. Knowing that they have already been defeated by the heroes, Jangles and the rest of forces under Kingpin's command had no other choice but to retreat back to the remainder of their active bases in the meantime.

Duel of the Death

When the breaking news about Bullseye's short-lived victory after assassinating Karen Page and subsequent defeat at the hands of Daredevil have swiftly spread throughout Kingpin's own empire across the city, Fisk assigned Jangles to take in Lester's place as the infamous mercenary, giving him a identical replica of the Bullseye suit, something that was previously made to him by none other than Melvin Potter before. From that point on afterwards, Jangles momentarily replaced Lester to in the role of Bullseye, in his assigned task by Fisk to hunt down the ultimately injured and dying Daredevil, who was being protectively held by former director Nick Fury and his remaining team inside a S.H.I.E.L.D. van on the way to Metro General Hospital.

Assisted by a few selected of his men to chase down the S.H.I.E.L.D. van secretly holding the critically wounded Daredevil, they were able to catch the latter, successfully crashing the van in the process. Executing their plan very well, Jangles finally uses the advantage to turn against his own men by shooting them following them dealing with the S.H.I.E.L.D. agents, revealing his betrayal towards Fisk and his empire and try and kill the Guardian Devil by himself in order to ruin the Kingpin's amusement and goal to have his revenge on him, showing that he was actually doing this as some sort of "redemption" act for his unhinged side by framing the Kingpin once he gets to murder Daredevil and hand him over to the National Security Agency to gain his fame and popularity as a government agent.

However, by the time Jangles could have gotten his chance to end the unconscious vigilante's life, his attempt was abruptly interrupted by Nick Fury, distracting the mercenary on his own while he let the other operatives restart the van and continue their course to get to the hospital and take the Daredevil there safely. The two continues to battle within the streets of Manhattan, to which the Bullseye impostor manages to use his outstanding and unmatchable marksman skills to his advantage, severely wounding Fury in the process.

Realizing who he has single-handedly defeated, Jangle remarks that he can still put a bullet on the head of the former S.H.I.E.L.D. Director, even if he won't get the chance to kill Daredevil. Little did the arrogant mercenary was aware of, the fallen Fury was having his time to prepare his weapon of last resort against him, swiftly aiming his specialized needle pistol at Jangles. Fury's shot seemingly failed at first after squeezing the trigger, much to Jangles who tried to mock Fury afterwards, not immediately realizing that the latter had intentionally missed his shot by ricocheting the bullet, bouncing off until it goes straight towards the back of Jangle's head, killing him instantly.

Transportation: None known.
Weapons: Any object held in Bullseye's hands is a "potential weapon," even to Jangles himself, a mere but accurate impostor of the real Bullseye. However, he will often use guns and knives, as well as a number of throwing weapons such as shuriken or even just playing cards.

Retrieved from "https://marvelcomicsfanon.fandom.com/wiki/Leonard_Jangles_(Earth-61615)?oldid=266618"
Community content is available under CC-BY-SA unless otherwise noted.