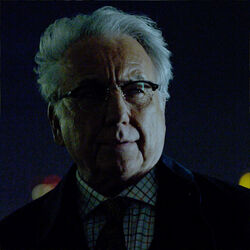 Owlsley was recruited by Wilson Fisk to control Fisk's money inputs and outputs, ensuring the authorities could not uncover their work. Owlsley took great pride in his work, having years of experience working for high ranking criminal organisations and keeping their investments safe and secure. Although he had great respect for Fisk, Owlsley never fully trusted him and ensured he had back up plans ready in case Fisk ever betrayed him.

One night, Owlsley waited on the top of a building, along with Madame Gao, Nobu, Anatoly Ranskahov, and Vladimir Ranskahov, awaiting the arrival of Wilson Fisk. Owlsley spent much of the time complaining about the cold weather and Gao's and Nobu's refusal to speak English. Eventually, James Wesley arrived, claiming Fisk was too busy to attend. Wesley began to question why the Ranskahov's supply was down; they claimed their shipment had been attacked by a masked man, Owlsley remained unphased by the news, claiming that new heroes in the city meant more career opportunities for them in the aftermath.

A few days later, Owlsley met with James Wesley to discuss a recent trial defending an assassin they had hired named John Healy. Owlsley could not understand why Wesley had chosen to hire two young, inexperienced lawyers from Nelson and Murdock rather than using his own lawyers; Wesley explained that the two lawyers were clean and had excellent reputations, unlike Owlsley's lawyers. Owlsley continued asking questions, wanting to know why Fisk did not just have Healy killed like all their other problems. Wesley explained that they were producing too many dead bodies which could lead to suspicion. When Owlsley asked why Wilson Fisk was not there to explain this himself, Wesley told him he was busy looking at art, which greatly annoyed Owlsley.

Masked Vigilantes, Crazy Russians. I'm getting my stun gun out of storage.

Owlsley was later called for another meeting, this time without the Ranskahov brothers. He observed pints of blood being washed off Fisk's car; when he asked if anyone else was concerned about the site, all he received was a laugh from Madame Gao. They were interrupted by the arrival of Wesley and Wilson Fisk. When Owlsley asked where the Ranskahov's were, Fisk announced that the brothers were no longer a part of their organisation since Fisk had removed Anatoly Ranskahov's head.

Both Gao and Nobu made it clear they were unhappy to have not been consulted in the matter; Owlsley also agreed. Fisk told Gao to continue moving her heroin to the Russians as usual until such a time that Fisk to take over the responsibility. Owlsley pointed out that the Russians' share of the money would likely go to Fisk if that was the case but Fisk assured them all profits would be divided up equally between them. The group agreed on the proposal, with Owlsley noting he would not be foolish enough to go against the three of them. Before they all departed, Owlsley, getting nervous, told them he would be collecting his stun gun.

Face to Face with the Masked Man

The funds have been reallocated as requested, all the arrangements made as per your agreement with the guy we're not supposed to blah blah blah.

Owlsley met with Nobu in a car park to discuss the transport of his cargo, Owlsley made it clear that he knew what was being transported as he had decrypted the paperwork, he suggested that he and Nobu work to protect each other in light of what had recently happened with the Russians. Nobu instead told him that all men must stand alone or fall, he then left and Owlsley made his way to his car.

Before he could get away, he was confronted by the man in the mask who pinned him against his car and demanded to know who he worked for, promising that if Owlsley lied he would hit in the face. When Owlsley tried to insist he worked for Silver & Brent, the man hit him hard in the face, causing his face to badly bruise. The man revealed he knew Owlsley worked for Wilson Fisk but before he could learn anymore about Fisk's activities, he appeared distracted by a sound in the distance, Owlsley took the chance and hit him in the neck with a taser, stunning his attacker before getting in his car and escaping.

My son was coming to visit, I had to tell him no stay out of New York. Lee, shits going on. I'm 73 years old, you know how many times I have left to see him.

Due to his recent attack by the masked man, Owlsley was taken to Wilson Fisk's armorer and tailor, Melvin Potter, who fitted him with a kevlar suit for protection. Owlsley and Fisk discussed what measures should be put in place to protect him, Fisk suggested that he should be taken to a safe house with armed guards. Owlsley reminded Fisk that if the masked man was to throw him off a roof, then a lot of money would be lost along with him, when Fisk asked if this was a threat, Owlsley assured him that he was just stating the obvious. James Wesley then arrived and informed them that although Detective Christian Blake had been successfully assassinated, the man in the mask had gotten into the hospital and got information out of him. Owlsley mocked Fisk for the failure.

I appreciate your support in the matter."
"Sure, why not, we're all in this together right? What's left of us.

At Wilson Fisk's penthouse, Owlsley was informed of Nobu's violent death while the pair prepared for a fundraiser. Fisk ordered Owlsley speak to Madame Gao and convince her that everything was fine in their organisation. When Owlsley made a comment about Fisk's relationship with Vanessa Marianna, Fisk spoke to him about what it meant to be in love, seeing the change in Fisk caused by Marianna, Owlsley agreed to speak to Gao.

Owlsley had a meeting with Madame Gao where they agreed that Vanessa Marianna was having a negative effect on Wilson Fisk's work and they arranged for her to be poisoned at the fundraiser. After Fisk gave his speech, he spoke to Owlsley who assured him that the meeting was a success, Owlsley then offered each of them a glass of poisoned champagne which Marianna gratefully accepted. While Fisk was speaking to a senator, Marianna collapsed along with many other attendants who had also drunk the champagne. Fisk ran to her aid and Owlsley dropped his own glass having not taken a sip yet.

Speak with Gao, if she wasn't involved we might need her support against further unpleasantries."
"And if she was involved?"
"Then it's been an honour doing business with you

Marianna was rushed to Metro-General Hospital and Owlsley went along with her, asking the doctor if he also needed to be checked out as he was holding a glass of poisoned champagne; the nurse ignored him however and continued to focus her attention on Marianna. Owlsley watched as Wilson Fisk attempted to go with her surgery but was stopped by the nurse.

While Marianna was being treated in the hospital, Owlsley spoke to James Wesley about how Fisk could run the business in his emotional condition. He claimed that whoever poisoned Marianna was likely after Fisk, not her, so they were in danger and needed proper leadership. When Wesley considered Madame Gao as a suspect, Owlsley claimed it was more likely Nobu's Clan who were responsible. They were then informed that Marianna was still alive but three others who drank the champagne were now dead. Wesley then sent Owlsley to speak to Gao for support.

After meeting Gao, Owlsley returned to the hospital and asked about Vanessa Marianna's condition; Fisk however refused to speak to him and returned to Marianna's room. Owlsley spoke instead to James Wesley and claimed Gao had only spoken Chinese and quoted a fortune cookie, but she said she would stand with Fisk if it came to that. Owlsley told him that Fisk needed to get back to work but Wesley told him he would when he was ready, much to Owlsley's annoyance. Owlsley warned that whoever had gone after Fisk would come after him again and would likely succeed in killing him. Wesley simply told him to go home and get some rest.

Whatever war you're thinking about starting, don't lose sight of the endgame. Once Senator Cherryh has cleared the last of the zoning issues, you can tear down the rest of Hell's Kitchen and build your better tomorrow. It's a shame not everyone will be there to see it, but, uhm, shit happens.

Owlsley was contacted by Wilson Fisk to come to a warehouse, when he arrived he was stopped by Francis only for Owlsley to push his way forward. He found Fisk starring at the corpse of James Wesley who had been shot in the chest multiple times. When he asked what had happened, Francis revealed that Wesley had received a call the night before and had gone out alone with a gun. Hearing this threw Fisk into a rage and he mercilessly beat Francis until Owlsley convinced him to stop. As Fisk sat next to the body of his closest friend, he and Owlsley discussed who could be responsible, Owlsley told him that Nobu's accounts were still active and his clan were the prime suspects.

Owlsley had a meeting with Fisk that night where he claimed to have not found any information to blame the Japanese, Fisk ordered the reward for information to be doubled until someone talked. Fisk then received a call on James Wesley's phone and immediately left the meeting. Owlsley called a meeting with Madame Gao, who arrived late, she spoke English to him for the first time and claimed to have been detained by unfortunate events involving the man in the mask. They discussed the risks of Wilson Fisk learning that they planned to assassinate Vanessa Marianna, he asked if she was responsible for James Wesley's death but she assured him she was not. She told him she was going to her homeland, which was much further away than China, and they would not speak again.

But I'm a fair sort, that's why I'm only taking half your money. You go your way, I go mine, not exactly what I'd call win win, but it's as close as we're going to get with this. So, we on the same page?

After being called for a meeting with Wilson Fisk to discuss the final stages of his plans for the city, Owlsley explained that all was in place except for a replacement for Madame Gao's heroin trade. Fisk presented him with paperwork and asked about some irregularities in the money movements, Owlsley claimed it was all perfectly normal as money was being moved around all the time, however when he tried to hand the paperwork back, Fisk noted that his hands were shaking and he was sweating. Seeing no other alternative, Owlsley confessed to trying to kill Vanessa Marianna although he denied any involvement with James Wesley's death.

Owlsley calmly informed Fisk that their partnership was at an end and Fisk was to hand over half his assets to him, when Fisk asked why he should do this, Owlsley informed him that he had Carl Hoffman and Hoffman was willing to go to the police if anything happened to him. This threw Fisk into a rage and he refused the offer and hit Owlsley hard across the face, Owlsley attempted to defend himself by striking Fisk on the neck with his stun gun, but Fisk was so angry it seemed to only fuel his rage. Fisk threw Owlsley down an elevator shaft where he hit his head hard and was killed.

Retrieved from "https://marvelcomicsfanon.fandom.com/wiki/Leland_Owlsley_(Earth-1010)?oldid=189953"
Community content is available under CC-BY-SA unless otherwise noted.