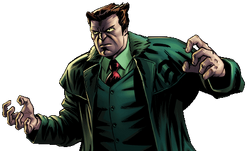 Lee "Owl" Owlsley was the son of a ruthless financier, Leland Owlsley, although he had a respectable image. After his father stole from Kingpin and attempted to murder his girlfriend, the latter killed the accountant, making Lee grow resentful. Somehow, "the Owl" managed to get a serum he supposedly used to glide and even fly for short distances; he had to use the serum frequently to retain these powers.

The Owl attempted to steal his father's stolen money from the Silver & Brent building and fought the Masked Man when he attempted to stop him. The vigilante defeated him, but the Owl managed to escape.

Flight: The Owl's main power is his capacity for limited flight. The source of this ability is a special serum that originally enabled him to naturally glide for short distances (roughly 100 feet /30.5m); ultimately, his physical makeup has changed to a degree which allowed him to expand on these initial facilities. Typically, he must leap from a height of at least 20 feet (6.1m) off of the ground to allow for enough lift, but he has occasionally started from a standing position - although he has not been seen to travel higher than 15 feet (4.6m) in this way. His distance and speed are variable depending on ambient air currents and the height of his original lifting leap. With a strong tailwind he can travel distances of several hundred yards/meters and reach speeds of up to 30 miles per hour (48.3 km/h). Diving from a helicopter or skyscraper could increase his rate of flight even further, while jumping from a parked city bus or freeway overpass would result in a slower and shorter glide. The Owl might also intensify his flight efficiency through other methods, such as leaping from a moving vehicle. To aid in landing, his rate and speed will decrease as he loses altitude. Although the Owl's powers are most effectively used in conjunction with the surrounding airflow, there is very little to suggest that he cannot use them without one. The Owl has managed to achieve better control of his flying abilities through use over time. While airborne, he uses his arms and legs for balance and steering but is still able to perform complex midair maneuvers and engage in combat with little variation in his flight pattern (such as a free-fall followed by a quick ascension, allowing for a "swoop" attack).

The limits of his flying powers are inconclusive, he typically uses these abilities in short bursts, depending on the situation. While there may be an as yet unknown physical source aiding the Owl's abilities, his glide/flight ratio -the rate of drop compared to the distance traveled- coupled with other variances he has displayed suggests the presence of some type of psionic assistance. While some data has been presented concerning the Owl's anatomy, specific details concerning how his respiratory system has adjusted itself to the stresses of flight, how long the he can remain aloft before becoming fatigued, or how his body regulates the energy to do so are still vague. Information concerning the maximum altitude the Owl can reach is also unavailable. The Owl's powers are affected by his physical condition at the time, and any illness or injury would impede his ability to use them.

The Owl acquired most of his powers through the regular use of a "flight serum", the source and nature of which remain largely unrevealed. What is known is that, after prolonged use, the serum drastically altered the Owl's physical make-up; aside from flight, other abilities slowly began to manifest themselves, a majority of which were bird-like in quality. Because of the serum's mysterious characteristics, many of these abilities only began to be known after the Owl started exhibiting them. The Owl does not seem to rely on these secondary attributes as often as his power for flight, and their sporadic use and unusual origins do result in speculation as to their full extent and usefulness. Although it has been indicated that chronic use of the serum exacerbates at least some of these traits, exactly how it does so is not understood. Besides its unclear effects on his abilities, there are other factors that remain undefined. Little data exists as to how the serum is ingested, how dosages are regulated, if it exists in one form or multiple versions, or even if the Owl continues to administer it considering the damage it has done to his body. It should be stated that while the Owl may rely on chemical agents for his powers, he has never displayed any symptoms of chemical addiction.

Adaption to Flight: The Owl's body has undergone a series of complex changes over time that assists his ability to fly.

He has developed a special vertebrae in his neck that permits him to rotate his head nearly 270 degrees. The musculature and vessels around the neck have altered to allow for this action without restricting the flow of blood to his brain. However, the Owl has only been seen doing this twice. It is unclear if he no longer retains this ability or only uses it in rare circumstances.

Superhuman Strength: Despite occasional changes in body shape, The Owl has a low fat-to-muscle ratio and possesses a greater proportionate muscle mass than a typical person. While he only engages in moderate exercise, he can still lift/press around 600 lbs. (272 kg.) with great effort.

Enhanced Senses: The Owl's senses of hearing and vision, while nowhere near as acute as those of an individual like Wolverine, still operate at a range considerably higher than that of a normal human-being. His eyesight is particularly strong in low-light conditions. He may have developed something akin to the tapetum lucidum, a reflective layer of tissue behind the retnia which reflects visible light, allowing for better nocturnal vision and creating the appearance of eyeshine. He is apparently also able to move his eyes independently of each other. The Owl's eyes have adjusted to the rigors of flight and both possess a transparent nictitating membrane (an extra lid located on the side of the eye, allowing for additional protection, moisture retention and the removal of minute particles) with its own blink reflex.

Durability: It has not been confirmed that the Owl possesses a true healing ability, nevertheless he has consistently displayed a resilience which suggests a greater than human muscle efficiency and metabolic control allowing for unusual endurance and extraordinarily rapid recovery from injury and fatigue. Although more severe injuries do require a longer convalescence period, he has managed to recover from trauma severe enough to kill or permanently incapacitate an ordinary human-being -including serious injury to his brain, spine and nervous system as well as gunshot wounds to major organs. It is probable that, due to the heavy damage done to his nervous system, he could have a greater-than-average threshold for pain which he may use to his advantage in certain situations.

Transportation: Owl's Flyer: A distinctive flying vehicle that can carry up to 4535 pounds; Owl uses it to transport himself and his gang.
Weapons:

Retrieved from "https://marvelcomicsfanon.fandom.com/wiki/Lee_Owlsley_(Earth-1010)?oldid=189928"
Community content is available under CC-BY-SA unless otherwise noted.