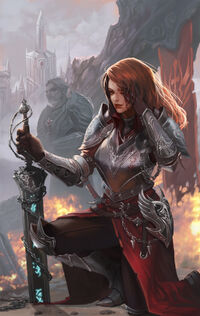 We are the people of Asgard! We show no fear, no matter who the threat is! Onward, to battle!

Ledrerlia is a fierce, yet courteous warrior. She is the youngest of her siblings, Sif and Heimdall.

When she was a kid, she enjoyed the gardens of Asgard. She always went outside to play with nature. She also spent time with Alfar children. She then got to play with Sif, Thor, and Loki. When her sister was taken, she was extremely sad. She didn't even want to go outside, being afraid that what happened to her sister was going to happen to her. When her sister returned, she was happy and her personality was restored.

Since Thor and Sif were in love at the time, she messed around with them, and even once tried to make them kiss. It failed, but it did make Loki laugh when it almost worked. But while Thor was being a hero on Earth, Ledrerlia and Sif were training in case of a threat. When Ledrerlia got too cocky, she went to a dangerous place where she was attacked by multiple evil entities at once. She then got the courage to slice through them. When she did, the darkness faded and she saw a sword with a symbol of enchantment on it. She then lifted the sword from the stone it was lodged in. Then, a mischievous spirit put a permanent marking above her right eye, making it look like she was bleeding.

With the sword, she went to Valhalla and fought off a minor disturbance. She realized the sword she had was the sword her sister told her about, Nethersong, and then told her sister about the sword. Sif was pleased that she got her own mystic weapon.

When Asgard went to war with the Dark Elves, she led the Asgardian warriors into battle as the War Maiden. She used Nethersong against the Dark Elves, and when she was surrounded, she released its true potential. She made an entire firebird from the power of Nethersong, and the bird burned away some of the Dark Elves.

After she defeated the Dark Elves, she practiced more with her sword. She was sharpening it, and then got a vision from the few previous wielders. She saw that the reason it had the enchantment was because the previous users used it for evil, and it was almost used to destroy Asgard until Odin put the enchantment on it.

When she traveled to where the Dwarves were, she got some Uru and began to enjoy forging weapons. She then sold the forged weapons to Asgardian warriors. She also made another sword for herself. After her multiple years of practice with swords, she achieved godhood status, becoming the Goddess of Swords. With this title, she was able to use swords as a form of magic. When Malekith decided to send Dark Elves to Asgard, she used her sword magic to get rid of all the Dark Elves sent.

When Ragnarok happened, she saw that her sister died, and in vengeance, she went on a rampage and started killing multiple Fire Giants. She later died with her blade broken.

She was woken up by a dwarf who had traveled to earth. The dwarf returned Nethersong back to her, and it was new and different. When she was told the location of the other Asgardians, she traveled there. When she got there, she noticed Sif wasn't there. She decided to help Thor find Sif. When Jane Foster told them she found Sif, they took her back to Oklahoma.

On Earth, she decided to relax and got to meet the people Thor hung out with as well. She also got to meet Doctor Strange. She began to show an interest towards human life, so she decided to sometimes return to Earth to help its heroes defeat threats.

Asgardian Physiology: She has the traits of a normal female Asgardian warrior. She is extremely durable and could survive a mini explosion.

Instant teleporting: She could teleport through things in a few seconds. This allows her to quickly travel through the nine realms.

Sword Magic: She has very high sword magic. She could make a blade storm, cast enchantments, summon mystic swords and many more capabilities.

When she has Nethersong, her sword magic powers increase. She could also manipulate Hellfire and normal fire on a very high scale. She could create a phoenix embodiment from her sword. While she wields Nethersong, she can also create a flaming chamber and a wave of fire. The fires can burn to be as hot as the surface of the sun.

Swordsmanship: She is skilled in Swordsmanship and can memorize every combat pose with swords when she only sees it one.

Combat skills: She can also use physical combat with her hands.

She can be overpowered by more skilled warriors.

Equipment: Nethersong: This sword has an enchantment on it so only those who are pure can wield this weapon. When she went on a rampage, she couldn't lift it anymore, though this was reversed when she was reborn.
Transportation: Teleportation, Rides flying horses, High speed running.
Weapons: Nethersong and multiple other swords.

Retrieved from "https://marvelcomicsfanon.fandom.com/wiki/Ledrerlia_(Earth-616)?oldid=223696"
Community content is available under CC-BY-SA unless otherwise noted.