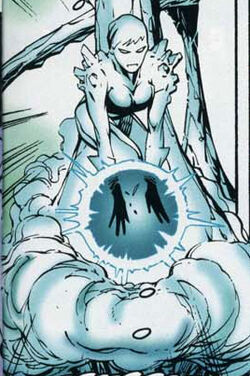 Brain Freeze was the beloved daughter of Iceman and Psylocke. She was the 2nd most powerful X-Man after White Wolf. It is theorized though that she could surpass him in power. She was raised well among the X-Men. She was happy with her life, and was a huge prankster and jokester like her father. However, she is also smart and knows how to use her head. She was created out of a fling, though, so she was raised solely by her father, and thus rarely uses her telepathy unless the situation calls for it.

Towards the end of 2009, Iceman and Psylocke had fallen in love. She was able to physically increase his power, and he emotionally raised hers. They were a deadly and efficient pair in battle. And they had an emotional, but non-physical relationship. After Iceman tried to get her to lighten up a little, he got a very different result than he expected: a daughter.

Shortly after Layla's birth, Psylocke settled down with Wolverine, and bore him a son: Howl. This made them half-siblings. As such, she was only raised by Iceman. She inherited all of his fun-loving prankster traits. And his powers were nothing to laugh at, either. She was always a dedicated X-Man in training. She was by far the most light-hearted of the group. Everybody loved her, but she always felt especially close to her half-brother Howl. She always disagreed with the leader White Wolf, as Iceman disagreed with leaders sometimes. She was extremely saddened when Howl left the X-Men.

When the Skrulls came to Earth, she was part of the X-Men team to fight them, but she was captured. When the Skrulls let their guard down, she was able to escape, along with Iron Knight. She was able to recruit all of her reserves, which included Mercury, SunStorm, X-Bandit, Mystery, and Yeti. Psi-Lord assisted as well. They were successful in the battle, and afterwards, Chill decided to use her telepathy more. In honor of this, she changed her codename to Brain Freeze.

Thermal Vision: Able to sense others by their heat since little surrounds her.

Cryokinesis: Layla can shape the moisture in the air into any ice construct she can imagine.

Hydrokinesis: In her ice form, she can control water, and can melt herself and merge with other bodies of water.

Teleportation: In ice form, she can project her consciousness to a desired location, and can reform a body out of ice there, which she can also turn human again.

Ice Clones: Chill can make ice clones of herself.

Telepathy: Brain Freeze can paralyze people with her minds and can block memories. These are the only uses of her power she has currently.

Telekinesis: Similarly, Brain Freeze can also lift objects with her mind, but that is the only function of this power she has manifested.

Retrieved from "https://marvelcomicsfanon.fandom.com/wiki/Layla_Drake_(Earth-1175)?oldid=152312"
Community content is available under CC-BY-SA unless otherwise noted.