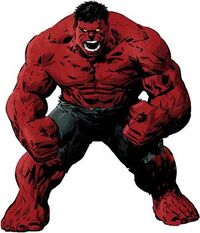 Single
Occupation
CEO of Trask Industries
Origin
Origin
Larry's father would inject unknown chemicals inside him while he was young. When Larry became an adult, he was a scientist and in an experiment with Dr. Banner's gamma research, the experiment malfunctioned and Larry was exposed to gamma radiation and transformed into a Red Hulk-like beast.
Creators

Larry was the son of billionaire genius Bolivar Trask, so you'd expect Larry to live a luxurious life but actually it was worse than you might think. His mother was always out burning a whole through Bolivar's pocket while Bolivar was always working and whenever he would be home, he would inject Larry with unknown chemicals. But it wasn't all that bad, as his Nanny Marie, was there for him in his childhood.

When Larry was 6, his father was finally arrested for conducting illegal genetic experimentation on his son, and Larry never saw him again. S.H.I.E.L.D examined Larry and saw that he had mutated DNA but it wasn't fatal. After this, Larry's mother became more responsible and decided to be in Larry's life more, although Larry thought of Marie as his real 'mother'. At age 10, it appeared the Larry had inherited his father's genius as he was a child prodigy at school. When Larry turned 18, he graduated High School and had inherited Bolivar's company, Trask Industries from his father due to his imprisonment.

While on a new project in the year 2038, at age 24. Larry started a new project called the 'Banner Project', where they would attempt to discover medical miracles in Gamma radiation. One day the experiment went wrong, and Larry was exposed to gamma radiation, transforming him into a huge mindless beast, resembling a lot of the Hulk but red. The Red Hulk went on a rampage through Manhattan but eventually was stopped by Spider-Man and Iron Man. After the Red Hulk was defeated, he reverted back to Larry Trask, S.H.I.E.L.D took him in and examined him and said, the gamma exposure enhanced his mutated cells resulting in him transforming into a mindless beast, S.H.I.E.L.D kept Trask in custody in case another 'incident' happened again.

A month later, Larry and his father Bolivar were released from S.H.I.E.L.D custody, Bolivar apologized for everything he had done to Larry, Larry easily forgave him but Bolivar was lying and wanted to gain Larry's trust so he could become like Larry. After 2 weeks of bonding, Bolivar drugged Larry and took a sample of his blood. Larry later woke up and discovered his father had gone, realizing his father had tricked him.

A few hours later, while at a bar. Larry saw on the news that another Hulk-like creature was rampaging through the streets of Manhattan. Larry knew that it was his insane father Bolivar and had to stop him, as he knew the other heroes would not be able to. Larry went to his father's location and attempted to make himself angry but failed, his father now calling himself A-Bomb punched Larry into a building, the building crumbled and the Red Hulk emerged more angrier than ever. The Red Hulk and A-Bomb battled for hours, Red Hulk was losing until the Red Hulk went into a ballistic rage, the Red Hulk beat A-Bomb to a pulp. The Red Hulk and A-Bomb had a mental conversation (similar to Bruce and David Banner in 2003's Hulk), the conversation ended by Red Hulk shouting "YOUR FAULT!!!, Red Hulk then battled A-Bomb once more and ended the battle by snapping A-Bomb's neck. S.H.I.E.L.D arrived and Red Hulk leapt away

A month later, Lawrence was living in England and was approached by S.H.I.E.L.D director Nick Fury about his new project 'The Ultras' a successor group to the disbanded Avengers, Fury promised if he joined Red Hulk would be able to work with Dr. Bruce Banner in finding a cure or a way to control his inner monster.

As the Red Hulk:

As Red Hulk he is strong enough to lift well in excess of 100 tons.

Retrieved from "https://marvelcomicsfanon.fandom.com/wiki/Lawrence_Trask_(Earth-1315)?oldid=54804"
Community content is available under CC-BY-SA unless otherwise noted.