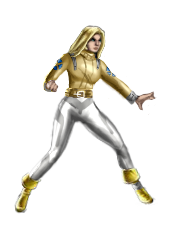 I'm not like him. But you know what...? I won't be like you either. I can't keep hiding from what I can do. Hiding from my emotions.

-- Wallflower to her mother, Gail

Laurie was a second-generation mutant. Her father, Sean Garrison, also had empathic pheromone powers, used it to manipulate people and get money, fame and women. Laurie's mother, Gail Collins, was one of these women. They married and stayed together until Gail gained immunity to Sean's powers because she was pregnant with his child.

Leaving him after learning what had happened, she raised Laurie alone. Laurie, following her mother's lead, became a quiet loner. Until one day, on holiday, she suddenly became very popular because her power had emerged. Her mother, realizing this (and immune to her pheromones), tried to talk her down gently - but Laurie, who hadn't realized why she'd suddenly become popular, became scared of what she could do and ended up even more withdrawn than before.

After the Xavier's School for Gifted Youngsters became public, Gail decided to send her there, and moved to Salem Center to stay near her, so that she could have one person whose reactions she could trust. Although Gail insisted Laurie live at the school, to try and make her come out of her shell. It didn't work. Laurie went through several roommates very quickly.

When Sofia Mantega came to the school, she was paired with Laurie and, given her ability to blow Laurie's pheromones away, Sofia didn't have to worry about being accidentally manipulated by Laurie. Refusing to let her stay in their room, Sofia started hanging around with Laurie, as did David Alleyne and Kevin Ford. Laurie and Kevin quickly developing mutual crush. Then, during a visit to meet Sofia's "dad" (not her real father, but his manservant who'd had more time for her than her real father ever had), they got into a fight with the Reavers, and Laurie was stabbed through the chest, mortally wounded. She was only saved when Josh Foley, one of the Reavers who had just discovered he was a mutant, healed her (and Laurie quickly developed a crush on him). Meanwhile Kevin, enraged, tried to kill Donald Pierce, the Reavers' leader, by withering him away with his power. Dani Moonstar was forced to make him confront his worst fear - killing Laurie - to make him stop, and he became extremely secluded. Laurie continued to stick around with her new friends and was happy when they were joined by Josh.

Eventually, she was officially placed on the New Mutants.

Laurie was a second generation mutant with powers similar to her father's, including:

Wallflower has only been shown to exert limited control over her powers. It is common for her to release pheromones that mirror her extreme emotions such as fear or anxiety.

Retrieved from "https://marvelcomicsfanon.fandom.com/wiki/Laurie_Collins_(Earth-1010)?oldid=146818"
Community content is available under CC-BY-SA unless otherwise noted.