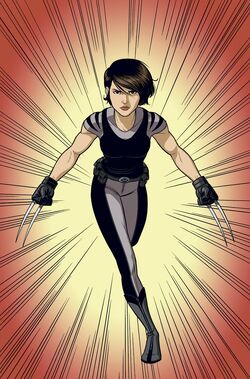 Single
Occupation
Adventurer, student, former assassin
Origin
Origin
Wolverine to;d his female clone to take his place on the X-Men when he could not fight.
Creators

I still know little of emotion, but I feel like I've covered his ass too many times.

Talon's history is exactly the same as that of Earth-616's Laura Kinney up until the Marvel NEW! relaunch.

Wolverine recruited Talon to join the X-Men since he could not be active during the day due to his vampiric curse. She reluctantly agreed. But soon she found that she could not replace Wolverine, nor was she going to try. She remained on the X-Men, but refused to continue his deal.

Clone Physiology: X-23 possesses most of Wolverine's powers from his time before becoming a vampire:

Laura is still a master tracker and assassin from training in Weapon X. She is also a master of stealth and martial arts/combat.

Retrieved from "https://marvelcomicsfanon.fandom.com/wiki/Laura_Kinney_(Marvel_NEW!)?oldid=255464"
Community content is available under CC-BY-SA unless otherwise noted.