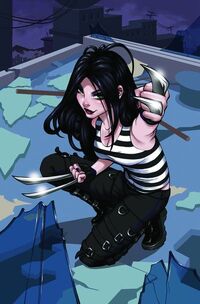 When Hydra's Weapon X facility was raided by S.H.I.E.L.D., a Hydra scientist that managed to escape recovered a blood sample of Wolverine.

After the success of Jimmy Hudson, the first clone of Wolverine. Hydra wanted to experiment more and so when making a new clone they manipulated the X chromosome and turned it into an X chromosome and see if they could possibly create a female clone. It was a success.

A surrogate mother gave birth to Laura. Hydra named her Laura Kinney, after her mother's surname. As a baby, her older "brother" Jimmy was very protective of her, often fighting Hydra agents who tried to run tests on her. Laura and Jimmy would form an unbreakable bond.

As a child, Laura and Jimmy's claws would manifest. Jimmy' would develop three with the ability to coat his claws with a metallic substance at will, while Laura had two claws on each hand and one claw on each foot. Jimmy and Laura would be subjected to many tests and would be told of who their "father" was and be condition to hate him and want to kill him.

Laura couldn't coat her claws with a metallic substance unlike her brother and so Hydra would attempt to coat her two hand claws and single foot claws with vibranium but was met with some resistance by Jimmy. Although Jimmy was restrained and could do nothing as they painfully grafted vibranium to Laura's claws.

At the age of seventeen, Hydra would gain intel on Wolverine's location in Canada. Hydra would then order Laura and Jimmy to find Wolverine, capture him but do not kill him.

After a few days of using their superhuman tracking senses, Laura and Jimmy would find Wolverine outside a bar and attack him. Wolverine is no match for their martial arts skills and becomes enraged popping out his claws and attacking them which results with Laura and Jimmy attacking him with their claws as well. They proved a formidable match for Wolverine but he defeated the two and unmasked them. A confused Wolverine would be caught off guard and electrocuted and knocked out.

Wolverine wakes up and asks who Laura and Jimmy were to which a Hydra scientist would reveal to him that they are his children. Confused, Wolverine states that he never had kids to which the Hydra scientist would explain that when S.H.I.E.L.D raided the Hydra Weapon X facility in the 1980s, one scientist escaped with Wolverine's blood sample. For many years they would attempt to clone Wolverine and in the 1990s it would prove successful resulting in the birth of X-22 and X-23 through surrogate mothers.

The Hydra scientist would also reveal their birth name to him and that Hydra had been conditioning them for years to believe Wolverine was their father that abandoned them and was an enemy. Laura and Jimmy would hear this and being clones of Wolverine they were enraged and began attacking Hydra agents, release Wolverine and the three would then go on a killing spree while escaping the Hydra facility.

Upon escaping, Wolverine would tell Laura and Jimmy how he never knew of their existence and was sorry they were brought into the world the way they were, never having a choice. But he offered them a place at the Xavier Institute so that they'll never have to feel alone again, Laura and Jimmy would thank Wolverine but decline the invitation believing that they needed to leave and figure things out for themselves to which Wolverine understands and wishes them luck on their travels.

Superhumanly Acute Senses: X-23 possesses superhumanly acute senses that are comparable to those of certain animals. She is capable of seeing at much greater distances, and with perfect clarity, than an ordinary human. She retains this same level of clarity in near-total darkness. Her sense of hearing is enhanced in a similar manner, allowing her to both hear sounds that ordinary humans can't and to hear sounds that ordinary humans can, but at much greater distances. X-23 is able to use her highly developed sense of smell to track targets by scent with an impressive degree of success, even if the scent has been eroded by natural factors, such as the weather.

Bone Claws: X-23's skeleton includes two retractable bone claws in each arm and one in each foot that she can extend and retract at will. These claws are housed beneath the skin and muscle. Unsheathing them causes her skin to tear and bleed, but the wounds are quickly dealt with by her healing factor. X-23 can unsheathe any number of these claws at once, although she must keep her wrists and/or feet straight at the moment the claws emerge. The claws are naturally sharp and tougher than normal human bone, allowing X-23 to cut through most types of flesh and natural materials. As a child her claws were bonded to Vibranium.

Regenerative Healing Factor: Like Wolverine and X-22, X-23's primary mutant power is an accelerated healing factor that enables her to regenerate damaged or destroyed tissue with far greater speed and efficiency than an ordinary human. She is capable of fully healing injuries resulting in massive tissue damage and blood loss such as multiple bullet wounds, slash wounds, and puncture wounds within a matter of minutes. Her healing factor is developed to such a degree, she is capable of reattaching severed limbs, such as a hand. She has also proven capable of regrowing an entire arm on her own (Elixir was incapacitated at the time). Her healing factor may fluctuate with her psychological state as battle wounds tend to heal very quickly, but her self inflicted cuts appear to remain visible for some time.

Foreign Chemical Immunity: X-23's natural healing also affords her the virtual immunity to poisons and most drugs. She can be affected by some drugs, such as tranquilizers, if she is exposed to a massive dose.

Disease Immunity: Due to her highly efficient immune system, X-23 is immune to all Earthly diseases and infections

Superhuman Stamina: X-23's muscles produce considerably less fatigue toxins during physical activity than the muscles of an ordinary human. She can exert herself at peak capacity for about 24 hours before fatigue begins to impair her.

Superhuman Agility: X-23's agility, balance, and bodily coordination are enhanced to levels that are beyond the natural physical limits of even the finest human athlete.

Superhuman Reflexes: X-23's reflexes are enhanced to levels that are beyond the natural physical limits of the finest human athlete. In at least one case she reacts to and slices in half with her claws a bullet fired at her face from nearly point-blank range

Superhuman Durability: She was capable of fighting the Wolverine without sustaining any severe injuries.

Expert Covert Ops Training: Raised in captivity, due to her extensive training as a top-secret operative, X-23 has been trained to become a living weapon. She is highly trained in the use of long range weapons and explosives, and is an expert in assassination techniques.[citation needed]

Expert Tracker: Due to her enhanced sense of smell, Laura is a dangerous tracker and has memorized many different scents.

Master Martial Artist: She is a master in hand to hand combatant, with intensive training in numerous armed and unarmed martial arts techniques during her time in the facility.

Master Acrobat: She is an Olympic class athlete, gymnast, acrobat and aerialist capable of numerous complex maneuvers and feats.

Multilingual: Laura can speak fluent English, German, French, and Japanese. She might be able to speak other languages.

Because of her healing factor, X-23 can push her muscles, joints, and ligaments to levels beyond the natural limits of a woman of her height, weight, and build without sustaining injury. Unlike Wolverine, her skeleton isn't laced with Vibranium. While her skeleton, much like her musculature, can withstand greater pressures than a normal human skeleton, she can only withstand so much weight and pressure without sustaining fractures. While not superhuman, she is as physically strong as an ordinary human can be and can lift about 800 lbs.

Equipment: None known.
Transportation: None known.
Weapons: Vibranium Claws: X-23's claws have been coated with the nigh-indestructible metal Vibranium. As a result, her claws are virtually unbreakable and are capable of cutting almost any substance, with the exceptions of Vibranium itself and Captain America's shield. Her ability to slice completely through a substance depends upon the amount of force she can exert and the thickness of the substance. Also, since the bones of her hands and wrists are not laced with Vibranium, it is likely that the reverberation of her claws could conceivably break her hands with significant force. Unlike Wolverine, the presence of Vibranium in her body is not sufficient enough to interfere with her bones' normal function of generating blood corpuscles, although it is as possible that some degree of her immune system is distracted by the presence of the foreign substance.

Retrieved from "https://marvelcomicsfanon.fandom.com/wiki/Laura_Kinney_(Earth-1111)?oldid=200151"
Community content is available under CC-BY-SA unless otherwise noted.