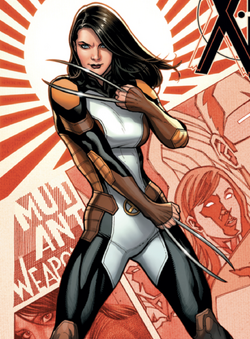 Touch me again, and I will cut off your hand and feed it to you.

Not long after Wolverine abandoned Weapon X, their scientists began harvesting his DNA in attempts to create a clone. The first 22 cloning attempts failed miserably, so one of the top scientists, Sarah Kinney, volunteered to carry the DNA inside of her to create a natural born mutant.

The result was a baby girl dubbed "X-23", secretly named Laura by her mother. She was raised to become a capable killing machine, going through the same Adamantium bonding process as her father when she was only 13. From then on, she was led to believe her sole purpose was to kill Wolverine.

She was sent on countless missions to abduct and assassinate mutants of interest all to train her, preparing her for the inevitable confrontation with her father. When she was finally sent after him, Wolverine was eventually able to deduce her origins, and managed to get through to her. He embraced her as his daughter, and held her as she cried. She had never considered herself a person, but Wolverine promised her he could teach her what that meant.

She was honored by his offer, but she decided she needed to figure it out for herself. She began traveling the world in an attempt to connect with its people. She came to discover that Weapon X had allied itself with Hydra to share resources to make the breakthrough that created her, so she began attacking Hydra bases across the world. This eventually attracted the attention of S.H.I.E.L.D., and she was confronted by Captain America. The two went to get a meal, and he told her stories about her father, which convinced her to return to Krakoa and finally form a family for herself with the X-Force.

After beginning to integrate into her new family, something still felt off to her. She may have put a dent in Hydra's operations, but the Weapon X scientists that created her were still out there. Eventually, she and Wolverine teamed up to continue investigating the operation. The investigation led them to the home of Sarah Kinney, where they discovered she had given birth to another child of Wolverine named Gabby. They discovered Sarah had become disillusioned with Weapon X after they put Gabby through the Adamantium bonding when she was only 6, and she took her daughter and ran away. It was at that point that Weapon X revealed they'd been tracking them and assassinated Sarah, leaving Gabby in the care of Logan and Laura. They vowed to become the family she never knew she had and to give her a home, just as Wolverine and X-Force had done for Laura.

Retrieved from "https://marvelcomicsfanon.fandom.com/wiki/Laura_Kinney_(Earth-101)?oldid=250211"
Community content is available under CC-BY-SA unless otherwise noted.